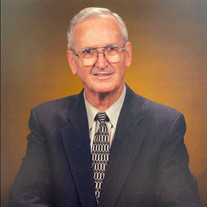 Randall Groom Thompson of Terrell, TX, entered the presence of the Lord on May 18, 2022. As a father, brother, relative, and friend, he modeled generosity, hard work, and love to his family and friends every day. Randall entered this world as the son of a farmer in Van Zandt County on July 8, 1937. He was one of the three youngest children of a family of eleven and was the fifth son of Rufus and Vera Thompson. Randall graduated from Mabank High School in 1955, a fact of which he was justly proud! He then held various jobs in the summer but could not find what he felt was a “good job” because he was single and subject to the draft. This was disappointing to him because he was very hardworking and wanted a job where he could grow and invest himself. Due to this, he decided to join the Air Force in November of 1955 and served with honor for four years, receiving an honorable discharge. After leaving the Air Force, he moved back to Dallas, Texas, where he found work with the Hostess Cupcake Company and Mrs. Baird’s Bread Company. In 1964, he began his career in insurance and after 14 weeks in the business, he was able to make $400 per week (good money in those days!) and he realized he had found his niche. He continued in insurance as an agent for the next forty-five years. He had enormous talent as a salesman and it was said that “he could sell ice to an eskimo”! He was involved in all kinds of insurance such as property and casualty but his specialty was life insurance. He enjoyed creating flow charts and data development as well, which gave him unique and helpful insight and an edge in the insurance business. After his retirement, he worked at various retail stores because he loved being productive and being with the public. He even worked as a Salvation Army Santa, which he enjoyed greatly! The children were thrilled by his big, booming voice and personality, too! Randall, like all the Thompson brothers, was a great gardener and especially delighted in cultivating tomatoes. He liked the outdoors a great deal and went on a few hunts. However, his main source of enjoyment was getting together with family and trying to make sure everyone knew each other. He went to great effort to stay in contact with cousins and second cousins, etc. All family members were important to him! Because of this, he often organized family reunions and thoroughly relished them. He also enjoyed watching the Dallas Cowboys and the Texas Rangers and even though he finished up his career in Houston, he never felt any real connection to their professional teams. Most importantly, however, Randall was a firm believer in the Lord Jesus Christ and called upon Him for salvation—something of which he would testify often and firmly. He truly kept the faith and never doubted or wavered. From the age of twenty-seven, he remained a committed member of the Church of Christ. Randall was preceded in death by his mother, Vera; his father, Rufus; his sisters, Nadine, Nelda, Melba, and Lynda, and his brothers Horace, Willard and Joe as well as nephew Allen Thompson; and nieces Gwin Pate, Phyllis Powell, Tanya Delgado and Sabrina Thompson. Randall is survived by his son, Randall Gene Thompson, his wife, Annette and their children Monetta and Nicolas; daughter Callie DiFrancesco and husband Blake, and daughter Katie Thompson as well as numerous cousins, nieces, nephews and friends. Randall was, according to the Bible, a “mighty man” since he achieved 84 years, and a mighty man he was to all those who knew and loved him. He is and will always be greatly loved and missed.

Randall Groom Thompson of Terrell, TX, entered the presence of the Lord on May 18, 2022. As a father, brother, relative, and friend, he modeled generosity, hard work, and love to his family and friends every day. Randall entered this world... View Obituary & Service Information

The family of Randall Groom Thompson created this Life Tributes page to make it easy to share your memories.

Randall Groom Thompson of Terrell, TX, entered the presence of...

Send flowers to the Thompson family.