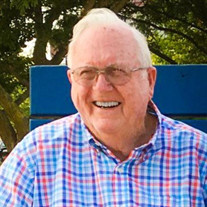 ***Mr. Appleton's service will be LiveStreamed on our website*** Ray Appleton, formerly of Terrell, passed away peacefully on June 20, 2021. Ray was born October 29, 1936 in Dallas to R.S. and Margaret (Armstrong) Appleton, both of whom preceded him in death along with his son, Ray Appleton, Jr., daughters, Marquita Bensler and Pamela Kay Appleton, brother, Stan Appleton, sister, Rowena Taylor, his wife, Jill Roscoe Appleton, and brother-in-law Gary Moss. A hard working man with a dedicated work ethic, Ray worked for the Texas Dept of Public Safety as a highway patrolman from 1962 to 1974. He later drove an 18-wheeler for Owens Country Sausage, delivering to warehouses to several states in the south and southwest. Never shying away from a new opportunity, Ray started his own business, Ray’s Vending Service, that he operated for over 25 years with machines in municipal buildings, banks, apartment complexes, and nursing homes located throughout the Terrell and Garland areas. After selling his vending business, Ray worked at the Home Depot in Terrell where he was a valued sales associate for 16 years. Ray’s smile and willingness to help became a welcome sight to fellow employees and customers at the store where he was known as "Mr. Encyclopedia" because of his vast knowledge. Ray’s commitment to work was second only to his commitment to his family. He was a devoted husband to his wife, Jill, until her passing in 1998. He found love again with Audrey, and they were married on Sept. 3, 1999, in Las Vegas. They were wonderful parents and grandparents to their new blended family, all of whom they loved like each was their own. He spent a lifetime enjoying the outdoors, especially fishing with his family, and was known among many for his "Appleton Fish Fry" events. He was also a member of the Tyler Lodge No. 1233 in Tyler. A wonderful man who never met a stranger and made everyone feel like family, Ray will be missed by all who knew him. Ray leaves his memory to be cherished by his wife, Audrey Moss Appleton of Canton; children: Richard Appleton and wife, Sherri, of Alvarado, Kim Townsend and husband, Keith, of Garland, Kyle Marscola and wife, Shona, of South Bend, IN and Kelli Patton and husband, Randy, of Terrell; grandchildren: Cody Patton and wife, Savannah and their daughter, Whitley, Jennifer Jones, Bailey Patton, Lauren Jones, Jacob Marscola, Alexis Marscola, Kristina Appleton, Jeremy Appleton, Jennifer Littlejohn, Pete Bensler, Jr., Alex Butler, and Amber Bastible; several great grandchildren; one great-great grandchild; brother, Ronald Appleton and wife, Brenda, of Midlothian, TX; sister, Sue Poston of Acworth, GA; sister-in-law, Serretta Appleton of Canton; brothers-in-law: Lonnie Moss and wife. Rebecca, David Roscoe and wife. Cathy, Michael Roscoe and wife. Jerri, Joe LaRoe and wife. Beverly and sister-in-law Lindy Savage as well as numerous nieces, nephews, extended family and a host of friends, all of whom loved Ray dearly. Ray’s family would like to extend a special thank you to his Terrell Home Depot family for their love and respect for him throughout his years and for caring for his family during his illness, and to VNA Hospice of Kaufman, especially to Emily, Stephanie, Shirley, Paula and Monica for their care of Ray. Funeral service will be at 10:00am, Thursday, June 24, 2021 at Max Slayton Funeral Chapel with interment to follow at Sardis Cemetery in Waxahachie, TX. His family will receive friends from 6:00pm to 8:00pm, Wednesday, June 23, 2021 at the funeral home. In lieu of flowers, the family asks that donations be made to VNA Hospice at www.vnatexas.org.

***Mr. Appleton's service will be LiveStreamed on our website*** Ray Appleton, formerly of Terrell, passed away peacefully on June 20, 2021. Ray was born October 29, 1936 in Dallas to R.S. and Margaret (Armstrong) Appleton, both of whom preceded... View Obituary & Service Information

The family of Ray Appleton created this Life Tributes page to make it easy to share your memories.

***Mr. Appleton&#39;s service will be LiveStreamed on our website***

Send flowers to the Appleton family.