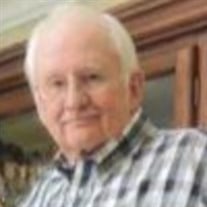 David Richard Barrow, of Terrell, passed away peacefully on February 9, 2022. He was born in Greenville, Texas, to James William and Frances Lorita Barrow, both of whom met him in Heaven along with his first wife Kay, who passed in 2009, and his second wife Belinda, who passed in 2018. Richard grew up in, and was a longtime member of, the First Christian Church of Terrell and later in life was a faithful member of the First Baptist Church of Terrell. Richard married the love of his life, Kay, on July 1, 1972, and together they made their home in Terrell where they raised their two sons. He was a fixture at any event they participated in and was active in the community, including serving on the Terrell ISD School Board for 10 years. Like his father he had a lifelong passion for automobiles which led him to a career in mechanics. He was the General Manager of Barrow Tire Co. in Terrell for over two decades where he picked up the nickname “Doc” due to his innate ability to diagnose and fix anything. Richard was a longtime member of the Terrell Boat Club and loved spending time at the lake boating, relaxing, and visiting with friends. He also loved his granddaughters more than words can express and never missed a birthday or special event. A kind and selfless man, who was always ready to share his kindness and knowledge with others, Richard will be greatly missed by all whose lives he touched. He is survived by his sons, Dewayne Barrow and wife, Adrienne, of Frisco, Texas, and Brian Barrow and wife, Lori, of Benton, Louisiana; grandchildren: Madison, Charlotte, Belle and Tess; his brother, J.W. Barrow and wife, Ann, of Terrell, as well as numerous other relatives and a host of friends. Funeral service will be 2:00 pm, Tuesday, February 15, 2022, at First Baptist Church in Terrell with interment to follow at College Mound Cemetery. The family will receive friends 5:00pm to 7:00pm, Monday, February 14, 2022, at Max Slayton Funeral Chapel. In lieu of flowers the family requests memorials be made to the First Baptist Church Building Fund, 430 N. Catherine St. Terrell, Tx 75160.

David Richard Barrow, of Terrell, passed away peacefully on February 9, 2022. He was born in Greenville, Texas, to James William and Frances Lorita Barrow, both of whom met him in Heaven along with his first wife Kay, who passed in 2009, and... View Obituary & Service Information

The family of Richard Barrow created this Life Tributes page to make it easy to share your memories.

David Richard Barrow, of Terrell, passed away peacefully on February...

Send flowers to the Barrow family.