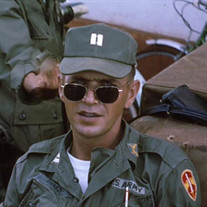 Richard M. Boszor, of Forney, passed away peacefully on May 31, 2021 at his home with family at his side. Richard was born July 28, 1936, in Jackson, Mississippi and he was preceded in death by his mother, Maxine Mize, father and step-mother, Lawrence and Carrie Boszor. Richard grew up in Jackson and enlisted into the Army October 15, 1961. He served with honor and distinction until his retirement in October of 1970 and then worked for the US Post Office until his civilian retirement. Before his employment with the post office, Richard was job searching and applied for a position at a company where a nice young lady named Bernice was also working as the secretary. Upon meeting him, she thought Richard was the most handsome man she had ever seen. As he was leaving the office, his car broke down. Bernice stopped by to see if he needed help and then she asked him out. Six months later they were married, on March 16, 1974, and together they had many years of happiness and good times. They loved to travel by driving the roads all over most especially to deep east Texas cities and landmarks and Colorado. They had an occasion to meet some wonderful new friends and even some celebrities on their many excursions! Richard and Bernice’s latest adventure was to Galveston where seeing the Gulf and the spending time on the beach. Richard also played the trumpet, roller skating, shooting guns, jumping out of airplanes and spending time for grandkids. A loving man who always was a firm foundation of love and providence for his family, Richard will be greatly missed. Richard is survived by his loving wife of 47 years, Bernice Boszor of Forney; his sons: Eddy Boszor and wife, Tena, and Robert Boszor and wife, Danine; daughters: Debbie Berryhill, Kenna McDaniel and Kelly Cacas; 8 grandchildren; 12 great grandchildren; and 1 great-great grandchild as well as other extended family and many friends. Funeral service for Richard will be 2 p.m. Thursday, June 3, 2021 at Max Slayton Funeral Chapel with an interment at College Mound Cemetery to follow. Richard's family will receive friends an hour prior to service time where stories and memories can be shared of his legacy.

Richard M. Boszor, of Forney, passed away peacefully on May 31, 2021 at his home with family at his side. Richard was born July 28, 1936, in Jackson, Mississippi and he was preceded in death by his mother, Maxine Mize, father and step-mother,... View Obituary & Service Information

The family of Richard M. Boszor created this Life Tributes page to make it easy to share your memories.

Richard M. Boszor, of Forney, passed away peacefully on May 31,...

Send flowers to the Boszor family.