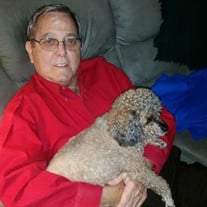 Richard Sifford, formerly of Terrell and Holly Lake, TX, passed away Saturday November 24, 2018 in Tyler. He was born August 24, 1943 in Terrell, Texas to Loran H. and Lila Stephens Sifford. Richard was met in Heaven by his beloved wife, Joyce, parents and brothers: James and Nolan Sifford. Richard grew up in Terrell and attended Terrell Schools where he made many friendships that continued his whole life. Upon turning 18, Richard enlisted in the US Marine Corps where he proudly served our country. During his service, Richard sent a letter with a marriage proposal to the love of his life, Joyce Hendon, and she happily accepted. Joyce and Richard had known each other since he was 9 years old and their love was built on the foundation of faith and devotion. They were married for 53 years until her passing in January, 2017. Richard worked for, and retired from, Mrs. Baird’s Bread, a job he truly enjoyed because of his co-workers and the reputation of Mrs. Baird’s in the D/FW area. He loved giving back to the communities he served and, as a result, the City of Duncanville bestowed upon him a proclamation for “Richard Sifford Day” honoring his many hours of volunteer work. He was also inducted to the Texas Police Officers Hall of Fame for his tireless devotion to volunteering with both Duncanville and Hawkins police departments and their many outreach programs. Richard had a membership with the Duncanville Jaycees where his civic pride showed in every event. Richard was also inducted into the Pony League Baseball Hall of Fame commemorating his encouragement to young athletes and umpiring over the years. In his spare time, he avidly studied, read, and researched all forms of history especially American History and the history of Armed Forces. His admiration and respect for ALL branches of military was very strong and Richard made sure that every patriotic event and holiday were marked with pride and honor. Richard is survived by his daughter Beverly Lassiter, and James Morgan, of Burleson, Tx; his son, Jason Sifford and wife, Kelly, of Mechanicsville, Md; 5 grandchildren: Amber Bankston and husband, Kolten, of Odessa, TX, Brian Kerr and wife, Brittany, of Ft. Worth, Corey Kerr and wife, Anna, of Ft Worth, Zach Ayers and wife, Alison, of La Plata, MD, and Megan Kerr of Ft. Worth; twelve great grandchildren; siblings: Merita Harper, Barbara Ennis, Emma Jo Moss, Linda Reyes and husband, Mel, Paul Sifford and wife, Sunny, Kathy Quattlebaum, and husband, Buzzy; special friend, Wanda Smith, as well as numerous nieces nephews, extended family and a host of friends. Funeral services for Richard will be 3 pm Sunday December 2, 2018 at Max Slayton Funerals and Cremations. Visitation will be at 2 pm Sunday one hour prior to service. Private interment will be at DFW National Cemetery. The family requests, in honor of Richard’s love of helping others, that in lieu of flowers memorials be made to CASA for Kids of East Texas 3728 S. Park Dr. Tyler, Tx 75703 or your local Toys for Tots.

Richard Sifford, formerly of Terrell and Holly Lake, TX, passed away Saturday November 24, 2018 in Tyler. He was born August 24, 1943 in Terrell, Texas to Loran H. and Lila Stephens Sifford. Richard was met in Heaven by his beloved wife, Joyce,... View Obituary & Service Information

The family of Richard Sifford created this Life Tributes page to make it easy to share your memories.

Send flowers to the Sifford family.