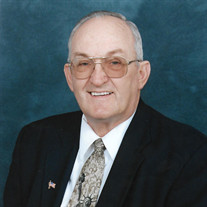 Richard Allen Williams, 81, went to sleep at his home in Wills Point, July 23, 2019, and woke up in Heaven, after succumbing to issues of heart failure. He was preceded in death by his Father and Mother, V.J. Williams and Pauline A. Hefner Williams Eubanks, and step-father Sherman Eubanks, his granddaughter, Stormie Cheri Davies, his brother, Doyle E. Williams, his niece, Lori Vest and his brother-in-law, Sammy T McDaniel. He is survived by his wife of 57 years, 9 months and 8 days, Paula Williams of Wills Point, TX along with their son David Williams, of Canton, TX, and their daughter, Rebecca Williams Davies, her husband Michael Davies and granddaughter, Bethany Davies of Wills Point, TX; sister, Velta Anne Vest of Melbourne, AR; brother, John Carlton Williams and his wife Cheryl, of Edmond, OK; sister-In-law, Linda McDaniel of Georgetown, TX, and her son, Ryan McDaniel, as well as many nephews, nieces and cousins. Richard was born February 18, 1938 in Frederick, OK to the late V.J. and Pauline Hefner Williams and raised in Chimes, AR. He was the second born of four children. At the age of 18, on November 6th, 1956, Richard enlisted in the United States Air Force and he began a career in the field of radar and early warning air defense. His service of 20 years found him in several local places and some not so local like Dhahran, Saudi Arabia, Manitoba, Canada, Tripoli, Libya and Seoul, Korea. He married Paula McDaniel on October 15, 1961 and from that union came their son David Williams in January of 1964 and seven years later in January 1971 they had a daughter, Rebecca Ann. After his retirement as a Technical Sergeant from the Air Force on November 30th, 1976, he joined his family in Terrell, TX where he acquired a real estate license and eventually started another 20-year career at the United States Postal Service. After his 2nd retirement, he and Paula moved out to the country where he enjoyed his gardening, looking at all his beautiful flowers, watching his hay field grow and making his famous homemade ice cream. Because of age and declining health, Richard & Paula moved from the country to Wills Point. TX to be nearer their children. At their new home, Richard continued to garden, plant flowers, maintain a beautiful lawn, make ice cream and spend as much time as he could with his granddaughter. Richard became a Christian early on and lived his life to the best of his abilities serving Christ. He was never shy about inviting someone to church or sharing his salvation experience. One of his favorite things to say when someone said they were praying for him was “well, you need the practice and I need the prayers.” Over the years, he attended many Southern Baptist Churches, the most recent being Oak Grove Baptist Church in Elmo. He served as a Sunday School Teacher, song leader, choir director and a deacon. He was always willing to serve in whatever capacity he was asked to. He was a caring, generous person who never met a stranger and would help anybody who needed it when possible. Richard was loved by many and will be greatly missed, especially by his family and his dog Sadie. A Celebration of Life for Richard Williams will be 11 am August 2, 2019 at Oak Grove Baptist Church with the family receiving friends at 10 am until service time. Committal service with military honors will be 230 pm August 2, 2019 at Oakland Memorial Park. Memorials may be made to a charity of your choice in Richard's honor.

Richard Allen Williams, 81, went to sleep at his home in Wills Point, July 23, 2019, and woke up in Heaven, after succumbing to issues of heart failure. He was preceded in death by his Father and Mother, V.J. Williams and Pauline A. Hefner... View Obituary & Service Information

The family of Richard Williams created this Life Tributes page to make it easy to share your memories.

Richard Allen Williams, 81, went to sleep at his home in Wills...

Send flowers to the Williams family.