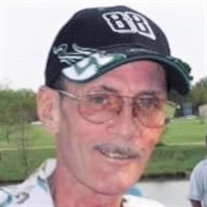 Ricky Wayne Rice, of Terrell, passed away peacefully in Forney on August 3, 2021 with his family at his side. Ricky was born April 4, 1953 in Terrell, Texas to Bonnie Gene and Anita Jean (David) Rice. He grew up and attended school in Terrell and was a graduate of THS Class of ‘71. During high school, Ricky held the seat of FFA President, played football as well as rodeoed with the FFA and local competitions. Later in his life, Ricky discovered his ‘need for speed’ and began racing stock cars on dirt tracks. He loved being on the track and his passion for racing was shared by his dad, Bonnie Gene, and together they built, rebuilt and raced several cars over the years. Rick’s love for all things automotive helped him develop his career path in Auto Sales and his friendly personality and vast knowledge of cars made him the ‘go-to’ sales person at the dealerships he worked for in Terrell and in the surrounding metroplex. His trustworthiness and integrity was evident to all who knew Ricky both personally and professionally. While Ricky was making sure to take care of others, one thing was always his first priority: his family. His devotion to them was unquestionable and he always made sure to put them first. He never missed an opportunity to show them how much he loved them and every phone call with Ricky was ended with his saying “I love you”. He enjoyed being in the outdoors hunting and fishing and watching NASCAR was his favorite pastime. Watching races elicited exciting and funny stories of his own time at the racetracks over the years. A man with a wonderful smile and generous heart, Ricky will be missed by all who knew him and never forgotten. Rick leaves behind his heritage of love to his sons: Chad Rice and Jock Rice; sisters, Vicki Rodriguez and her husband, Lupe and Susan McBride and husband, Phillip; grandson, Chase Rice and wife Ashley; great grandchildren: Blakeley Rice, Lincoln Rice, Berkley Rice, Oakley Rice; nieces and nephews: Paula Renfro and husband, Jason, Angela Rossi, Christine Bodin, Stacy Warren and husband Sarge, Colin McBride and wife Dixie, Brian McBride and wife Ashley, Dustin McBride and wife Lori and Joshua Armstrong as well as numerous great-nieces and -nephews, cousins and aunt, Mabel Jo Wester, and many friends who loved and will miss Ricky. Funeral Service for Ricky will be 2 p.m. Saturday, August 7, 2021 at Max Slayton Funeral Chapel with an interment at Oakland Memorial Park following the service. Ricky’s family will receive friends from 6 p.m. to 8 p.m. Friday, August 6, 2021 at the funeral home.

Ricky Wayne Rice, of Terrell, passed away peacefully in Forney on August 3, 2021 with his family at his side. Ricky was born April 4, 1953 in Terrell, Texas to Bonnie Gene and Anita Jean (David) Rice. He grew up and attended school in Terrell... View Obituary & Service Information

The family of Ricky Rice created this Life Tributes page to make it easy to share your memories.

Ricky Wayne Rice, of Terrell, passed away peacefully in Forney...

Send flowers to the Rice family.