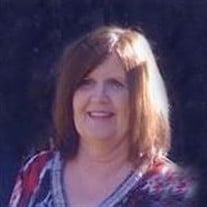 Rita Sue Hendrickson (Nunu), 66, of Forney, Texas passed away into the presence of her Lord and Savior on Friday, March 16, 2018 surrounded by her family. She was affectionately called Nunu by her beloved grandchildren and nephews. She was born to Edwin and Thelma Louise Boles in Dallas, Texas on January 17, 1952. She grew up in the Pleasant Grove area of Dallas where she attended Samuell High School after which, she moved to Forney in 1977 and made her home there. Rita was a successful business owner of R&R Plumbing for 30 years. Her sons, Terry and Jeff, followed her entrepreneurial spirit and both own successful plumbing companies, each proud to carry on Rita’s legacy of integrity. Rita was an active member of Last Generation Church, where she fulfilled her calling as the worship leader. She devoted her time to praying for others and spreading the word of God. Rita was a true Proverbs 31 woman in that her priorities were always serving the Lord and taking care of her family. The things in life that made her happiest were family, gardening, riding her bicycle, road trips, going to the beach, singing, playing piano, and reading. She was preceded in death by her grandparents, Harrison and Sammie Boles, Russell and Velma McBride; brother, Randy Edwin Boles; son, Larry Dale Parnell and father, Edwin Boles. Rita is survived by her mother, Thelma Louise Boles of Forney; brother, Timothy Mark Boles and wife Gwen Boles of Forney; son, Terry Parnell and wife Dianna Parnell of Forney; son, Jeff Parnell and wife Erica Parnell of Forney; daughter, Paige Hendrickson and boyfriend Sean Paperman of Dallas; grandchildren: Collin Parnell and wife Sarah, Lane Parnell, Tatum Parnell, Ethan Parnell, Alexis Parnell, Levi Parnell, Jackson Parnell, all of Forney; nephews: Timothy Boles Jr, Chase Boles and wife Tish; great-nieces and -nephews: Aubree Boles, Molly Boles, Parker Boles, Deacon Boles, and Dalton Boles as well as other extended family, church family and a host of friends who loved her and will miss her dearly. Funeral service for Rita will be at 2:00pm, Wednesday, March 21, 2018 at First Baptist Church of Forney with interment to follow at Hillcrest Cemetery. The family will receive friends 6:00 pm to 8:00pm, Tuesday, March 20, at Max Slayton Funerals and Cremations.

Rita Sue Hendrickson (Nunu), 66, of Forney, Texas passed away into the presence of her Lord and Savior on Friday, March 16, 2018 surrounded by her family. She was affectionately called Nunu by her beloved grandchildren and nephews. She was born... View Obituary & Service Information

The family of Rita Sue Hendrickson created this Life Tributes page to make it easy to share your memories.

Send flowers to the Hendrickson family.