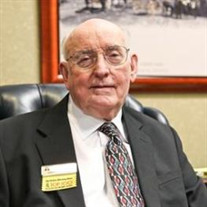 Riter Hulsey was born to Mary Riter and Burl Benson Hulsey and on December 10, 1920, in Forney, Texas where he graduated from Forney High School as salutatorian in 1938. He attended Texas Christian University and then transferred to the University of Texas where he graduated with a bachelor’s degree in business administration. During his time at the University of Texas, he was a member of the Phi Delta Theta fraternity and the Beta Gamma Sigma national honor society for business students. In 1942, Riter enrolled in the Harvard Business School and was commissioned an Ensign in the Naval Supply Corps. After graduating from Harvard, Riter returned to Texas where he went to work for Dow Chemical Company in Freeport, Texas. Riter C. Hulsey began his career with American National Bank of Texas in 1947 as a teller and has been a historic part of the bank’s growth and the Terrell community since that time. In 1949 was quickly elected assistant vice president and continued to climb the ranks. Riter served as chief executive officer of American National Bank of Texas from 1975 to 1985. In 1986 Riter was appointed chairman of the board which he held until his passing. Riter recently celebrated his 97th birthday and his 70th anniversary with American National Bank of Texas. Throughout his career, Riter set the example for how to treat customers, the importance of thanking them for their business, and his commitment to the community. Even when he did not feel well, it was important to him that he attend the annual customer appreciation party last week. Riter Hulsey understood that the bank’s interest in the welfare and development of the community contributed to the economic stability of the region. Throughout his career, he always led by example and encouraged all employees to be a part of the growth of the communities the bank served. Riter Hulsey was the well-deserved first recipient of the “Outstanding Citizen of Terrell” award and served on the Terrell Planning and Zoning Commission, Circle Ten Council Boy Scouts of America, the Terrell Youth Center board, the Senior Warden of the Episcopal Church of the Good Shepherd, the board of trustees for the Medical Center at Terrell, Terrell Rotary Club, the Terrell Chamber of Commerce and the Greater Terrell United Way Fund. Riter C. Hulsey is the namesake of the city of Terrell’s public library, where he has served on the board since 1949. Riter also served the financial industry on the Administrative Council of the Texas Bankers Association and as a director of the Independent Bankers Association. Riter was preceded in death by his wife, Gloria Gill Hulsey, and his brother, Burl Benson Hulsey, Jr. He is survived by his two children, Carol Hulsey Yowell and husband, David, and Robert Allen Hulsey, and wife, Sherry. He is also survived by his four grandchildren: Tony Hulsey, Brian Hulsey and wife,Keri; Steve White and wife, Abby; Lindsey Penny and husband, Trey. Riter has nine great-grandchildren: Kearstin Hulsey, Riter White, Bennett White, Trinity Hulsey, Taylor Hulsey, Gill Penny, Carter Penny, Harper Hulsey, and Wyatt Hulsey. With gratitude, he leaves behind his beloved caretakers: Karen Soto, Olivia Soto, Mary Brown, Kathryn Groessel, and Jannette Kennedy. The family would also like to express their appreciation of Jill Morgan. Riter Hulsey will be greatly missed and his memory will live on at American National Bank of Texas along with the high standards he set for customer service, his commitment to the ANBTX communities and his enduring love and support for his family and all the ANBTX employees. In lieu of flowers, the family asks that donations be made to the Riter C. Hulsey Public Library, 301 N. Rockwall Ave, Terrell, 75160 or The Episcopal Church of the Good Shepherd, 200 W. College, Terrell, 75160. Condolences and stories of how Riter touched the lives of each person he met can be shared with the family at www.maxslaytonfunerals.com.

Riter Hulsey was born to Mary Riter and Burl Benson Hulsey and on December 10, 1920, in Forney, Texas where he graduated from Forney High School as salutatorian in 1938. He attended Texas Christian University and then transferred to the University... View Obituary & Service Information

The family of Riter C. Hulsey created this Life Tributes page to make it easy to share your memories.

Riter Hulsey was born to Mary Riter and Burl Benson Hulsey and...

Send flowers to the Hulsey family.