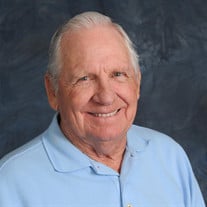 Robert Clayton Sneed, longtime Terrell resident, had his birthday into Heaven on November 25, 2019. Bob was born March 8, 1933 in Quitman, Texas to Emmett Clayton and Minnie Lee (Joyner) Sneed. He was joyfully welcomed into Heaven by his parents, his son, Clay Sneed and his beloved wife, Liz, sister, Florita Lindsey, brother, David Sneed, nephew, Earl Ray Moon and niece, Phyllis Ross all of whom preceded him in death. Bob graduated from Edgewood High School in 1951 and then enlisted in the US Navy on Jan. 18, 1952. He served proudly with special training in engineering and after his honorable discharge, he married the love of his life, Elizabeth Ann Carnes and they were inseparable until her passing in 2009. In 1961, he graduated from Texas A&M with a degree in Geology after which he began a long and respected career in engineering geology by analyzing ground materials to accurately assess risk factors and give advice on the best procedures for developments and the suitability of construction materials for various projects all over the United States. In 1963, Bob and Liz moved to Terrell where they raised their two children, Clay and Ronda, in a home filled with love and grounded in a solid Christian foundation. Bob served as Scout Master with Troop 391 in Terrell and he was a longtime dedicated member of College Mound United Methodist Church. Living in the same home for over 50 years afforded Bob the opportunity to see Terrell grow from a sleepy farming town into a thriving community and he loved living here. During his career, Bob worked for Geotech in Garland where he made many lifelong friends among his colleagues. He worked for, and retired from, Southwestern Laboratories in Arlington and his professional knowledge in engineering geology was so highly regarded that he was sought after on many projects on a national and global level. Locally, Bob was one of the geologists for the Superconducting Super Collider in Waxahachie, the Lake Tawakoni Dam Expiration Project and, most recently, the Margaret Hunt Bridge Installation Project in Downtown Dallas. Being able to travel the world for his projects also allowed Bob to enjoy his other hobby: fishing! He loved to fish anywhere and anytime he could, and he had memorable stories of some of the fish he had seen (and caught) in the Amazon and other states in the US. His favorite place of all thought was right in his “backyard” on Lake Tawakoni although he was known to fish at Lake Fork and other east Texas lakes with family and friends. A man who had an unequaled devotion to his family and an impeccable work ethic, Bob will be missed by all who knew him. Those left to carry on his legacy of love are his daughter, Ronda Hamilton and husband, Don, of Terrell; daughter-in-law, Denise Williams; grandchildren: Ryan Hamilton and wife, Ryanne, Megan Preston and husband, Chad, China Sneed and Robin Mann; great grandchildren: Audrey Taliaferro and husband, Austin, Gracie, Alli and Owen Hamilton, Hagen and Brynn Preston; brother, Earl Sneed; sisters-in-law: Ruth Flemister, Sue Sneed and Jan Jungjohann; brother-in-law, Jimmy Carnes as well as several nieces, nephews, great-nieces and -nephews, extended family, beloved church family and a host of friends all over the world. Funeral service will be at 2:30pm, Monday, December 2, 2019 at College Mound United Methodist Church with interment to follow at College Mound Cemetery. The family will receive friends Sunday, Dec. 1, from 4:00pm to 6:00pm at Max Slayton Funeral Chapel. For those wishing to make memorials in honor of Bob, they can be made to: the Juvenile Diabetes Research Foundation at www.jdrf.org, on behalf of Brynn Preston or to Terrell ISD Special Services, 700 N. Catherine, Terrell, 75160 on behalf of Owen Hamilton or to College Mound UMC, PO Box 793, Terrell, 75160 in recognition for Bob’s servant’s heart.

Robert Clayton Sneed, longtime Terrell resident, had his birthday into Heaven on November 25, 2019. Bob was born March 8, 1933 in Quitman, Texas to Emmett Clayton and Minnie Lee (Joyner) Sneed. He was joyfully welcomed into Heaven by his parents,... View Obituary & Service Information

The family of Robert "Bob" Sneed created this Life Tributes page to make it easy to share your memories.

Send flowers to the Sneed family.