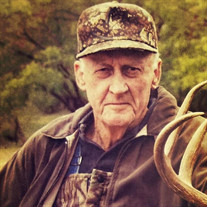 Don Coleman, of Terrell, passed away December 19, 2017 at his residence with his family surrounding him. Don was born in Josephine, Texas to Clifford Conway and Mary Emma (Morrison) Coleman, both of whom preceded him in death along with a brother, Paul Coleman and sister Janice James. Growing up, Don attended the Nevada public schools and was a US Army veteran having proudly and honorably served our country. He was a member of the Nevada Masonic Lodge and worked for, and retired from, AMEGA Industries in Longview. He was known as a steadfast man where his word was his bond. He loved his family and gatherings where he could just relax and catch up with them was his favorite way to spend time. Don was a wonderful husband who always made sure that his beautiful wife, Elaine, had everything she wanted and he was a doting father and grandfather and great grandfather who taught life lessons that will always be held dear. Don’s legacy of love and devotion will continue to be the heritage that his family and friends will be proud to carry on. Don is survived by his beloved wife, Elaine Belew Coleman of Terrell; daughter, Donnita Parker and husband, Wayne, of Phoenix, AZ; son, Gary Coleman and wife, Sharon of Farmersville; daughter, Kimberly Colemenares and husband, Jose, of McKinney; step-son, Pat McDonald and wife, Deanna of Seminole, TX; nine grandchildren and four great grandchildren; nephew, Billy Coleman and wife, Vicki, of Rockwall as well as extended family and a host of friends. A celebration of Don’s life will be held by the family at a later date and the family suggest in honor of Don’s love for all animals, donations can be made to the Second Chance Farm, PO Box 1085, Granbury,Tx, 76048 or www.secondchancefarmgranbury.org.

Don Coleman, of Terrell, passed away December 19, 2017 at his residence with his family surrounding him. Don was born in Josephine, Texas to Clifford Conway and Mary Emma (Morrison) Coleman, both of whom preceded him in death along with a... View Obituary & Service Information

The family of Robert "Don" Coleman created this Life Tributes page to make it easy to share your memories.

Send flowers to the Coleman family.