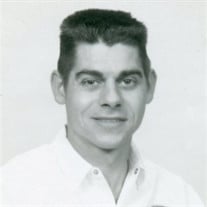 Robert Jed Travis Smith, of Terrell, passed away peacefully on November 2, 2017. Jed was born in Kaufman County, Texas to Anthony and Alice (Taylor) Smith, both of whom preceded him in death along with his sisters: Nancy Clower, Edith Raglin, Anne Gilgrease and brothers: Alfred, Anthony, Lonzo and Bill Smith; and his wife of 20 years, Barbara Hughes Smith Nealy. Jed lived and attended schools in Terrell and he was raised in the Church of Christ faith He was known for his incredible talents working with, and on, cars and Jed began his long and memorable career with Buddy Allen Chevrolet after which, he worked for Musser Motors. He then owned and operated his own business, Conoco Station and Distributorship on Town North Drive. Jed had a work ethic that solidified his reputation for honesty and integrity and every car he was able to help repair or improve served as proof of his professionalism and customer service excellence. When he wasn’t working, Jed enjoyed time with his family and friends going fishing with trot-line fishing for catfish being his favorite pastime. He also enjoyed traveling and one of his very favorite destinations was to Big Bend National Park. Jed’s peaceful spirit and easy smile will be missed by all who knew him. Those left to cherish Jed’s legacy are his daughter, Beverly Smith Vaughn and husband, Jim; son, Joe Smith and wife, Cindy; grandchildren: Abby, Zane and wife, Tara, and Alex Smith; great grandchildren: Serenity, Addyson, Landon and Payton Jo Smith; sister, Allene Craft, sisters in law: Ollie and Mary Smith as well as many other nieces, nephews extended family and a host of friends. Funeral services will be 11 am Tuesday November 7, 2017 at Max Slayton Funeral Chapel with interment to follow at Morrow Chapel Cemetery in the Ola Community. Family will receive friends 10 am Tuesday one hour prior to service. For those wishing, memorials may be made to the American Lung Association at www.lung.org.

Robert Jed Travis Smith, of Terrell, passed away peacefully on November 2, 2017. Jed was born in Kaufman County, Texas to Anthony and Alice (Taylor) Smith, both of whom preceded him in death along with his sisters: Nancy Clower, Edith Raglin,... View Obituary & Service Information

The family of Robert "Jed" Smith created this Life Tributes page to make it easy to share your memories.

Robert Jed Travis Smith, of Terrell, passed away peacefully on...