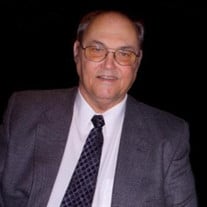 Robert C. Lovell, Jr., of Terrell, passed away on December 6, 2020 peacefully at his home. Robert was born Dec. 17, 1940 in Terrell, Texas to Robert, Sr. and Elizabeth Lovell, both of whom preceded him in death along with his daughter, Mindy Strawn and his sister, Libby Hayes. Robert graduated from Terrell High School after which he attended Henderson County Junior College (now TVCC). He worked at the Nike Missile Base until its closure in the late 1960s. Robert then joined the Mesquite Fire Department where he served the community of Mesquite faithfully in keeping the residents safe. During his tenure with MFD, Robert also gave his handyman expertise to others in helping with home repair projects and television repair in the surrounding area After his retirement from MFD, having attained the rank of Captain with the Arson Investigation Division, Robert joined the Dallas County Sheriff’s Office where he worked at the Frank Crowley Courts Building as a bailiff for over 10 years. He decided to retire again and spend time with precious family and friends making treasured memories with get togethers, celebrations or getting to go out on his boat to enjoy fishing every chance he could. Robert and Yvonne were faithful and active members of Good Shepherd Episcopal Church in Terrell where they were involved in many church ministries. A wonderful, husband, father, and provider, Robert had a heart for others as well as his beloved dogs, Micah and Maxie and he will be greatly missed by all who knew him. Robert is survived by his beloved wife, whom he married on June 15, 1965 at Good Shepherd, Yvonne Lovell; sons: Chad Lovell and Mark Lovell and wife, Dawn as well as numerous cousins, extended family, church family and a host of friends. Robert will be placed in state at the funeral home for public viewing from 1:00pm to 8:00pm, Thursday, December 10, 2020 at Max Slayton Funeral Chapel. For those wishing, condolences may be given directly to his family at www.maxslaytonfunerals.com where the staff will prepare each message to be given to Yvonne, Chad and Mark. At a later date, a graveside and committal service will be held 2 pm, December 17, 2020, at Oakland Memorial Park with military honors and officiated by Rev. David Faulkner and Chaplain Austin Holt of the Mesquite Firs Dept. In lieu of flowers, donations may be made to the Episcopal Church of the Good Shepherd, 200 W. College St., Terrell, 75160.

Robert C. Lovell, Jr., of Terrell, passed away on December 6, 2020 peacefully at his home. Robert was born Dec. 17, 1940 in Terrell, Texas to Robert, Sr. and Elizabeth Lovell, both of whom preceded him in death along with his daughter, Mindy... View Obituary & Service Information

The family of Robert C. Lovell Jr. created this Life Tributes page to make it easy to share your memories.

Send flowers to the Lovell family.