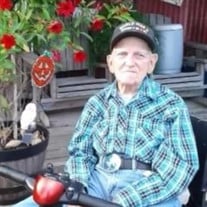 Maj. Robert A. Rowland, USAF, (Ret.), formerly of Irving and recently of Kaufman, passed away on Feb. 8, 2022 at his home with family at his side. Robert was born on May 28, 1927 in Fayetteville, AR to Arliss Marvin and Dorothy Mae (Swink) Rowland, both of whom preceded him in death along with his beloved wife, Lorraine Rowland, and his brothers: Joe, Bill and Jack Rowland. Robert graduated from Ft. Smith High School and later attended and graduated from, University of Arkansas. He enlisted in the Navy and transferred to the Air Force where he retired from achieving the rank of Major. After his military retirement, he worked in the private sector with NEC Infrontia Corp. as a technical writer/editor for electronics. He and his wife, Lorraine, were married on November 8, 1952 and together made a happy home for each other and their two daughters, Vicki and Robin, until her passing in 2011.He lived in Irving for over 47 years and, in 2015, moved to Kaufman. Robert was a devout Catholic and attended many churches in the D/FW area where he was active in several parishes and in the Knights of Columbus. Most recently, he attended St. John the Apostle Church in Terrell with his daughter, Vicki, where he made many friends among the members. He loved to spend time with his family and he was also an accomplished, talented poet and his words and prose will be forever treasured by his family. Robert is survived by his daughters: Vicki Elaine Stevens of Kaufman and Robin Anne Welch of Bedford; grandchildren: Daniel Welch and Debbie Cunningham; great granddaughter, Ellie Cunningham as well as nieces, nephews, and other extended family. A Mass of Christian Burial will be at 10:30am, Monday, February 14, 2021 at St. John the Apostle Catholic Church. Visitation will be 5:00pm to 6:00pm, Sunday, Feb. 13, at Max Slayton Funeral Chapel with a Rosary at 6:00pm. Interment will take place at 2:00 p.m. on February 28, 2022 in LANE ONE (1) at Dallas/Ft Worth National Cemetery where he will be laid to rest. The family suggests, in lieu of flowers, donations be made to the Terrell Animal Alliance, 13802 SARAH LN TERRELL, TX 75161, an organization devoted to helping all homeless animals.

Maj. Robert A. Rowland, USAF, (Ret.), formerly of Irving and recently of Kaufman, passed away on Feb. 8, 2022 at his home with family at his side. Robert was born on May 28, 1927 in Fayetteville, AR to Arliss Marvin and Dorothy Mae (Swink)... View Obituary & Service Information

The family of Maj. Robert Austin Rowland, USAF (Ret.) created this Life Tributes page to make it easy to share your memories.