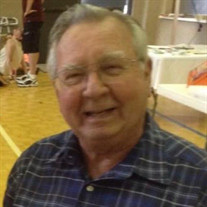 Robert Lee Tilson was born on July 7, 1930. In 1932, he was adopted by William H and Winnie Davis Tilson and his beloved sister, Anna Ann Robertson. He grew up in Bellevue, Texas, and later graduated from Plainview High School in 1947. He attended Texas A&M University for two and a half years before being drafted into the Army on September 11, 1951 where he served with distinction for 14 months in Korea during the Korean War. After Bob's honorable discharge, he returned to Plainview and worked for Pioneer Hybrid and the Plainview Compress. Always one to stay active, Bob also farmed his land when not at work. In 1962, he married Dorothy Wages Barrick and helped raise her sons in Plainview. After a long marriage, Dorothy passed away in 1996.On July 2, 1998, he married Glenna Clayton Tilson. The two were married 20 years, splitting their time between his home in Plainview and her home in Terrell. They shared a love of cooking, travel and westerns and just being together. With his marriage to Glenna, Bob also inherited a loud and opinionated family of four girls and all of their husbands and children. Holidays and birthdays took on new meaning (and noise levels!) for him. Family was always important to Bob and the time spent with his family and those who he considered family was time that he enjoyed most of all. His smile and welcoming hugs will be missed by all who knew him. Bob was preceded in death by his parents and his first wife, Dorothy. He leaves to cherish his memory his sister, Anna Ann Robertson. Bob is also survived by Dorothy’s son, Tom Barrick and wife, Bunny, and Tom’s children: Robin, Ian Eddington and grandson Ewan; Dorothy's sons: Clyde Barrick, Rickey Barrick, Dale McWhorter and their families. Bob is also survived by Glenna’s daughters, Pattie, Becky, Amy and Sharon along with their respective husbands, children, and grandchildren. A celebration of his life will be held at 11:00am, Wednesday, November 28, 2018 at First United Methodist Church of Plainview, 1001 W. Seventh Street Plainview, TX. 79072. A private interment will be held at Plainview Memorial Park in Plainview, Texas where Bob will be laid to rest with his family.

Robert Lee Tilson was born on July 7, 1930. In 1932, he was adopted by William H and Winnie Davis Tilson and his beloved sister, Anna Ann Robertson. He grew up in Bellevue, Texas, and later graduated from Plainview High School in 1947. He... View Obituary & Service Information

The family of Robert Tilson created this Life Tributes page to make it easy to share your memories.

Send flowers to the Tilson family.