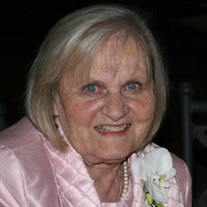 On Saturday, August 7th, 2021, Rolene Rann, beloved mother, grandmother, and great grandmother passed away at the age of 86. Rolene was proceeded in death by her father, Howard Upston, her mother Viola Upston, husband Jerry Rann, sister Betty Cummins. and brothers Howard Upston and Clarence Upston. She is survived by her 3 children; Jeff Rann and wife Kwezi of Hondo, TX, Cheryl Rubner and husband Michael of Terrell, TX, Steve Rann and wife Laura of Gladstone, VA; her six grandchildren Aaron Rubner and wife Amber of Forney, TX, Amber Alexander and husband Ryan of Sachse, TX, Ashleigh Adams and husband Dom of South Africa, Jared Rann and wife Nikki of Austin, TX, David Rann of Arlington, VA, and Michael Rann of Hondo, TX; her brother Tom Upston and wife Gail of Murphy, NC, her sister Debra Taylor Pierce and husband Don, her 8 great grandchildren and multiple nieces and nephews. Rolene was born on May 3rd, 1935 in Tekonsha Township, MI. She was raised and went to school in Tekonsha, where she played the French Horn in the high school band. She graduated in 1953, and following graduation, worked as a secretary at State Farm. On March 26th, 1955 she married Jerry Rann. Upon Jerry’s graduation from Michigan State University, they moved to Sawyer, MI where they raised their 3 young children. In 1967, Jerry took a position with US Aid for International Development and they moved to Lashkargah, Afghanistan. There they met a delightful British couple and became known for their legendary parties. In 1972, they moved to Kabul, Afghanistan for 3 years then returned to Tekonsha, MI in 1974 and purchased their home. In 1975, Rolene and Jerry moved to Zambia for 3 years, then to Tanzania where Rolene worked as a secretary for the US Ambassador to Tanzania. Rolene and Jerry moved to Ghana, Africa in 1980 prior to returning to the States. They lived in the Washington D.C. area before Jerry’s retirement in 1986. They then returned to Tekonsha fulltime where Rolene loved spending time with her family, frequently watching her grandchildren for extended periods of time. Rolene loved working in her yard, playing cards, bingo, dominos, doing jig saw puzzles, and hosting a annual Memorial Day picnic for the family. She had a lucky streak and almost always won playing the nickel slots. In more recent years, she could be seen sitting on her porch people watching and visiting with neighbors. Over the past 5 years as her health declined, she spent more time in Texas to be closer to her children and grandchildren. Here she spent many evenings playing dominos or cards, working on puzzles and gathering with family for birthdays and holidays. A memorial service celebrating her life will be held on Tuesday, August 17th at 6pm at the Max Slayton Funeral Chapel in Terrell, Texas with her family receiving friends beginning at 5:00pm to service time. An additional memorial service will be held in Tekonsha, MI on August 23rd.

The family of Rolene Rann created this Life Tributes page to make it easy to share your memories.

Send flowers to the Rann family.