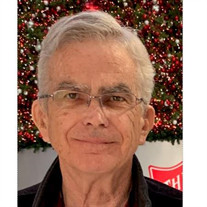 Ronald (Ron) Regan, longtime resident of Terrell, passed away peacefully on the morning of December 6, 2019 with his family at his side. Ron was born September 27, 1945 in Paris, Texas to William Marshall and Helen Bernice (Oyler) Regan, both of whom preceded him in death. Ron grew up in Paris, Tx where he attended schools until his family moved to Dallas after which he attended W.W. Samuell High School. While living in Dallas, Ron met Linda Swimm and on September 24, 1965, they married in Denton, Texas. Ron had an eye for design and how images fit together, and this talent enabled him to have a successful career with South Press Printing in Garland where he also served as a company board member and Director until his retirement in 2001. Ron and Linda raised their sons in the Dallas area and, in 1984, they moved to Poetry to enjoy living in the quietness of the country. He loved to travel with family and friends and his favorite trip was when he and Linda drove to the Carolinas, just enjoying the beauty of the outdoors. He was also a history buff, especially American history, and many detours were made at his request to see a historical marker or a locally renowned attraction. He enjoyed photography and made sure to take as many pictures as possible as precious memories were being made on his travels. Ron never took a day for granted and his favorite times were spent with his grandchildren. The love he had for Linda and his sons, Steve and Scott, was readily seen every day in Ron’s life and that love became exponential when he became a beloved “Grampy”. His favorite times were spent spoiling his grandkids and making sure they knew that he loved them so very much. He was intensely devoted and passionate about his family and his friends, yet Ron’s friendly and approachable personality made everyone who met him feel instantly comfortable and at ease talking to him. A loving husband, cherished dad and treasured Grampy, Ron will be missed by all who knew and loved him. Ron leaves to celebrate his memory his wife of 54 years, Linda Regan of Terrell; sons: Steve Regan and wife, Melissa, of China Spring, TX, Scott Regan and wife, Jennifer, of Forney, TX; grandchildren: Faith, Caleb and Caden as well as other extended family and friends. A Celebration of Ron’s life and legacy will be planned by his family at a later date.

Ronald (Ron) Regan, longtime resident of Terrell, passed away peacefully on the morning of December 6, 2019 with his family at his side. Ron was born September 27, 1945 in Paris, Texas to William Marshall and Helen Bernice (Oyler) Regan, both... View Obituary & Service Information

The family of Ronald (Ron) Regan created this Life Tributes page to make it easy to share your memories.

Send flowers to the Regan family.