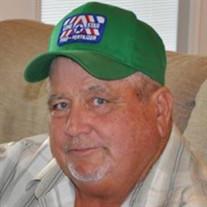 Ronald Sitzes, lifetime resident of Terrell, passed away December 29, 2021. He was joyfully met in heaven by his dad, Cliff Sitzes, who preceded him in death in 2020. Ronald was born December 3, 1955 in Terrell and lived his entire life in the community he loved. He was a 1974 graduate of Terrell High School where his easy-going personality was a bright spot in every other student and teacher’s day, and his friendly personality would continue throughout Ronald’s life. During high school, he met his soulmate, best friend, love of his life, Pam Pierson, and after dating all through high school, they were married on April 29, 1976. Ronald worked with the City of Terrell for over 20 years at the water treatment plant. After retiring from the City of Terrell, he then opened his own business, Sitzes Septic Service for many years where he truly enjoyed helping countless city and rural residents with their homes and businesses. When not working, Ronald loved spending time with Pam and his family while he watched Gunsmoke on TV, fished and gardened. Many of the days in retirement were spent with his beloved grandchildren and their games and imagination entertained Ronald for hours. Ronald had a great sense of humor, a smile for everyone he met and a profound loyalty for his beloved family and treasured friends. He will be greatly missed but never forgotten by the many lives he touched. Ronald leaves his memory to be cherished by his wife Pam Pierson Sitzes of Terrell; daughter, Shelli Holmes and husband, Carl Chandler; son, Rodney Sitzes and wife, Erica, all of Terrell; grandchildren: Logan Holmes, Landry Sitzes, and Avery Chandler; mother, Bessie Sitzes of Terrell; sister, Linda Southam and husband, Mark, of Rockwall as well as numerous cousins, extended family and many friends. Funeral service will be at 11:00am, Tuesday, January 4, 2022, at Max Slayton Funeral Chapel with interment to follow at Campground Cemetery. His family will receive friends 5:00pm to 8:00pm, Monday, January 3, at the funeral home.

Ronald Sitzes, lifetime resident of Terrell, passed away December 29, 2021. He was joyfully met in heaven by his dad, Cliff Sitzes, who preceded him in death in 2020. Ronald was born December 3, 1955 in Terrell and lived his entire life in... View Obituary & Service Information

The family of Ronald Ray Sitzes created this Life Tributes page to make it easy to share your memories.

Send flowers to the Sitzes family.