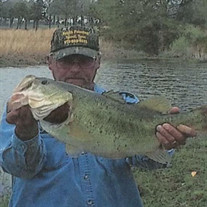 Ronnie Langley Sr. passed away into the presence of his Lord and Savior while surrounded by family September 26, 2017. While we are heartbroken to have had him called home to Heaven, we know that Ronnie is experiencing the glory of what God has promised to him and each of us and he is making sure all is ready for when we can be reunited one great day! Ronnie was born October 19, 1955 in Terrell, Tx to Wilman Lee “Cotton" and Virginia “Gean” Marshall Langley. He was preceded in death by his parents and his infant brother, Larry Lee Langley. Ronnie was an active member of Fellowship Baptist Church of Terrell where he spent countless hours giving back to the Lord when the new church building was constructed. His easy laughter and his dedication to always helping made him a true friend to all he met. Spending time with his family was his favorite activity along with fishing, cooking fish, looking for places to fish and, did we mention fishing?! He was a hometown man with an absolute and constant support for his hometown teams and watching the Dallas Cowboys and the Texas Rangers made him a very happy fan. He was also known for his immense talent at carpentry and he was regarded, far and wide, as one of the most talented woodworkers in the area. A man of few words but great devotion, Ronnie will be greatly missed by all whose lives he touched. He is survived by his beloved wife and soulmate, Susie Langley of Terrell; daughter, Jennifer Whitfield of Mesquite; son, R.L. Langley Jr. and his wife Angela of Terrell; cherished grandchildren: Hunter and John Noah McGuire, Kaidon and Kolton Langley; sister, Judy Duncan of Lake Tawakoni, as well as several nieces, nephews, extended family, his Fellowship church family and a host of friends. Funeral services will be 3:00 pm Friday September 29, 2017 at Max Slayton Funeral Chapel with interment to follow at Highland Memorial Gardens. Family will receive friends 6 pm to 8 pm Thursday September 28 at Max Slayton Funerals and Cremations. For those wishing, memorials in Ronnie’s honor may be made to Fellowship Baptist Church, 1550 CR 303, Terrell, TX, 75160.

Ronnie Langley Sr. passed away into the presence of his Lord and Savior while surrounded by family September 26, 2017. While we are heartbroken to have had him called home to Heaven, we know that Ronnie is experiencing the glory of what God... View Obituary & Service Information

The family of Ronnie Langley Sr. created this Life Tributes page to make it easy to share your memories.

Ronnie Langley Sr. passed away into the presence of his Lord...

Send flowers to the Langley family.