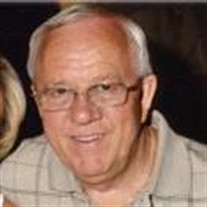 Roy W. Webb, Jr., lifetime resident of Terrell, passed away from this earthly life on June 25, 2018 to be reunited with his beloved wife, Judy, and his son, Scott, both of whom preceded him in death along with his parents, Roy, Sr. and Betty (Simpson) Webb, sisters: Dorothy Wright and Vivian Monk; and nephew, Thomas Ethier. Though our family is grieving, we take comfort in the words of the apostle Paul in that we do not grieve as those without the hope and we take comfort in the fact that we will all be together again with our family and our Savior in Heaven. Roy was born January 21, 1946 in Terrell and was a 1964 THS graduate. He then attended East Texas State University (now known as Texas A&M-Commerce) until enlistment in the Army National Guard in 1966. Roy met Judy Britton in high school and they married after she graduated on Feb. 4, 1966. Together they made their home in Terrell where they raised their two children, Scott and Kellie, with love and devotion. Roy’s personality was one of quiet determination which earned him the instant respect of all who met him. He worked for Vistawall (now Oldcastle) and gave 41 years of loyal service retiring in 2007 as Operations Manager. His skills of being a competent leader garnered him the reputation of fair in every matter personally and professionally. He successfully navigated the ever-changing responsibilities of the needs of his team as well as fulfilling the goals of the company and Roy achieved these results with honesty and integrity. He had a knack for seeing to the heart of any situation and his sound advice and guidance were valued by every person he knew. Roy’s wit was another part of his unforgettable personality and his brand of humor was a one-of-a-kind! He was a member of several civic clubs, including Kiwanis, and Roy considered himself to be very blessed to have so many friends, all of whom he held dear. A loving husband, devoted father, beloved grandfather, cherished brother, and treasured friend, Roy will be dearly missed by all. Roy leaves to carry on his legacy his daughter, Kellie Perry and husband Joe; grandsons: Spencer Perry and Blake Perry; great grandchild, Piper Perry; sisters, Winnie Sutherland, Gwendolyn Reed, and Polly Webb; a host of nieces, nephews, extended family and friends, including special friend, Debbie McClure. Funeral service will be at 10:00am, Thursday, June 28, 2018 at Max Slayton Funeral Chapel after which Roy will be laid to rest at Oakland Memorial Park. The family will receive friends 6-8pm, Wednesday, June 27, 2018 at Max Slayton Funerals and Cremations. For those wishing, memorials may be made to the American Cancer Society at www.cancer.com or to the Terrell Kiwanis Club, PO Box 12, Terrell, TX, 75160.

Roy W. Webb, Jr., lifetime resident of Terrell, passed away from this earthly life on June 25, 2018 to be reunited with his beloved wife, Judy, and his son, Scott, both of whom preceded him in death along with his parents, Roy, Sr. and Betty... View Obituary & Service Information

The family of Roy Webb Jr. created this Life Tributes page to make it easy to share your memories.

Send flowers to the Webb family.