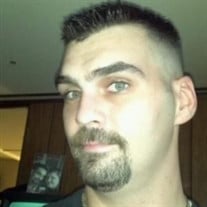 William Scott Cernoch (Scotty) passed away on March 7, 2022 in Dallas. Scott was born October 13, 1982 in Ft. Worth, TX, at Carswell AFB, to Billy and Terry Cernoch. He was preceded in death by, and joyfully reunited with, his mom, Terry Cernoch, grandfather, Bill Cernoch, Sr.; grandmothers: Patsy Cernoch and Sally Werts and his uncles Ronnie Langley and Tim Cernoch. Scott grew up in the Terrell area after his family returned from Guam where his father, Billy, was stationed while serving in the USAF. He loved to work with his hands and was very skilled at taking things apart and putting back together to see how they worked. He had a talent for repairing anything that could use a tune-up including motorcycles, cars or any machine that he could get ahold of. He worked for most of his life on the land his family owned where he truly enjoyed riding his tractor. Scott also enjoyed listening to music while driving the back roads with friends and he made sure to enjoy every day as a gift. His smile and laugh will be missed always and never forgotten. Scott is survived by his father, Billy Cernoch of Terrell; sister, Janice McRee and husband, Bobby, of Midlothian, TX; brother, Tim Tucker of Jay, OK; children: Seth Cernoch, Heather Cernoch, Emily Cernoch, and Leland Parson; aunt, Susie Langley; cousin, R.L. Langley and wife, Angela and their sons, Kolton and Kaydon; nephew, Ross McRee and wife, Michala, and their son, Carson; nieces: Chelsey Luttrell and husband, Casey and their daughter, Carly; and Lillian Tucker as well as other extended family and many friends, all of whom loved him dearly. Funeral service will be at 2:00pm, Monday, March 14, 2022 at Max Slayton Funeral Chapel with family receiving friends beginning at 1:00pm to service time. There will be a reception immediately following Scotty's service at 108 N. Blanche St., Terrell, TX, 75160. A private interment will be held at a later date where Scott will be laid to rest by family.

William Scott Cernoch (Scotty) passed away on March 7, 2022 in Dallas. Scott was born October 13, 1982 in Ft. Worth, TX, at Carswell AFB, to Billy and Terry Cernoch. He was preceded in death by, and joyfully reunited with, his mom, Terry Cernoch,... View Obituary & Service Information

The family of Scott Cernoch created this Life Tributes page to make it easy to share your memories.

Send flowers to the Cernoch family.