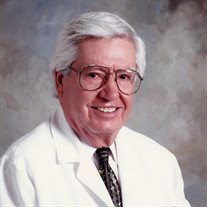 On Thursday, February 25, 2021 Dr. Sergio V. Figueroa, Sr., was called home to be with his Lord and Savior. Dr. Figueroa practiced medicine in Terrell, Texas for sixty years and was 88 years old when he retired in 2017. He was born in Tampico, Mexico and in 1941, during the war, the family moved to Nuevo Laredo so his father could continue working in the shipyards. While in Nuevo Laredo, Sergio completed high school in 1947. Shortly afterwards, he moved to Monterrey, Mexico to attend medical school and was there until he graduated from the University of Nuevo León in 1954. Sergio completed internship and residency training in surgery in 1958. In 1959, he moved to Terrell, Texas after being hired by Terrell State Hospital as the director of the Medical and Surgical unit where he worked for three years, side-by-side, with Dr. Jorge Martinez. In 1962 Dr. Figueroa entered private practice with Doctors Royce Mull and O. S. Leinart. The three physicians were very instrumental in establishing colonial Hospital in Terrell. Dr. Figueroa decided to go independently into private practice in 1967, specializing in surgery. Several years later, he entered a private practice partnership with Dr. Jorge Martinez for 15 years until he decided to resume independent practice in 1987. In the 1960s, he served with the Junior Chamber of Commerce as well as the Terrell Chamber of Commerce. He also was elected to the Terrell City Council and served in the capacity of Mayor Pro Tem. He was a member of the Rotary Club, Kaufman County Medical Society, and the Fellow of the international College of Surgeons. He was a past president of the Texas Chapter of International College of Surgeons. His patients spanned many generations. He considered them not only his patients but his friends. He remained practicing, until its closing, at Colonial Hospital where he had performed countless hours of surgery and provided stellar medical care to those in need. As a primary care physician and surgeon, he treated thousands of patients throughout his career. He was an icon in the medical profession both in Terrell and in Kaufman County. He was the example that future professionals should aspire to be. He will be missed by so many that he served with genuine care and compassion. He grew up in a different generation practicing medicine which was evidenced by his unlimited knowledge in multiple areas of medicine he practiced and the resulting impact he had on so many lives. Dr. Figueroa’s legacy will live on throughout the community with his countless patients and friends. He was an avid Dallas Cowboys fan, holding season tickets for many years. Tennis was a sport that he and his wife enjoyed together along with his family and friends. After his retirement, he continued his love of reading and watching his favorite shows: Murder She Wrote, Columbo, and The Masked Singer. He was an amazing man, and he will be missed by all of those who knew and loved him. Dr. Figueroa is preceded in death by his parents, Victor Figueroa Ortiz and Dolores Castillo Figueroa; his wife Maria Figueroa, and son, Dr. Sergio V. Figueroa, Jr. He is survived by his daughters, Sandra Rohde and Cristina Graves; son, Christian “KiKi” Figueroa; four grandchildren: Assisi Rohde, Victor Rohde, Avery Figueroa, and Nicklaus Graves along with his extended family who loved him unconditionally: Ashley, Paula and Gary Sexton and his longtime, best friend, Adger Satterfield. For those wishing to make it a donation in Dr. Figueroa’s memory, please make it to a charity of their choice in his honor. Calling Hours/Public Visitation for those he served to be able to pay their respects will be 10:00 a.m.to 8:00 p.m. Wednesday, March 3, 2021 at Max Slayton Funeral Chapel.

On Thursday, February 25, 2021 Dr. Sergio V. Figueroa, Sr., was called home to be with his Lord and Savior. Dr. Figueroa practiced medicine in Terrell, Texas for sixty years and was 88 years old when he retired in 2017. He was born in Tampico,... View Obituary & Service Information

The family of Dr. Sergio Figueroa created this Life Tributes page to make it easy to share your memories.

Send flowers to the Figueroa family.