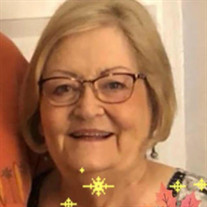 Sharron Dennehy, of Terrell, passed away peacefully into the presence of her Savior on the evening of January 7, 2019 surrounded by her family. She was born July 5, 1944 in Vernon, Tx. Sharron was preceded in death by her father Emerson Durwood Chappell, and his wife, Carol Jean, mother, Lois Ray Brown, and her husband, Donald Brown, brother, Danny Dewayne Chappell, step-sister, Carol Ann Pior, sister-in-law, Mary Park and brother-in-law, Mike Dennehy, Jr. Sharron was an angel on earth and everyone who met her instantly loved her. Her bright smile lit up every room that she entered and her ability to see the good side of everything was an encouragement to all. Growing up, Sharron was a tomboy and loved playing outdoors. As a young adult, her adventurous spirit continued as she would scuba dive and explore new destinations. Traveling and going on cruises were favorite pastimes of Sharron with her favorite places being anywhere by the ocean. She would be on the deck of the cruise ships watching for flying fish and she never failed to be delighted by how they shimmered in the sun as they jumped from the waves. She loved to say that life was about “blue water and pink drinks!” And, of course, serving God. Sharron worked at Texas Instruments for 30 years which is where she met her husband, Donald, and their real life “Brady Bunch” story began, Donald with 3 boys and Sharron with 3 girls. After leaving TI, she entered the medical field working as a radiology coder where her attention to detail made her invaluable to medical offices and companies nationwide. As much as Sharron loved to travel, she loved her family even more. To her, family time was her favorite time and the pride she had in her children, grandchildren and great grandchildren was legendary. Sharron’s personality was so approachable and, before anyone knew it, she was bringing out the pictures of each pride and joy so that others could see what she knew to be true: her grandbabies were the smartest AND the most beautiful (and, of course, everyone agreed!). She loved to cook for family and her church and she had a collection of kitchen gadgets that would rival any four-star restaurant! Her faith was also important to her and her membership at New Hope Southern Baptist Church kept her foundation of faith with the Lord strong and sturdy. The unconditional love she had for family and friends was an exact reflection of the love that Jesus has for all. The friendships made at New Hope were as close as family and, together with her family, the congregation grieves Sharron’s homegoing but take comfort in knowing everyone will be reunited one day in Heaven for eternity. Whether she was known as Sharron, Sis, Sherry, Mama, Nana, Aunt Sis, My Sharron as she grew up, married, became a sister, mother, grandmom and friend, Sharron will be forever cherished and never forgotten. She leaves behind her legacy of love and faith to her husband, Donald Dennehy of Terrell; children: Darla Fowler and husband, Chad, of Royse City, Terri Lutonsky and husband, Joe, of Seven Points, Tracea Bechtol and husband, Chuck, of Forney, Pat Dennehy and wife, Theresa, of Forney, Bill Dennehy and wife, Laurie, of Kaufman, and Jim Dennehy and wife, Michelle, of Terrell; brother, David Chappell and wife, Gaylene, of Midland, Tx; 14 grandchildren; 11 great grandchildren; sisters-in-law: Barbara Tortora and JoAnn Marriot as well as numerous nieces, nephews, great-nieces and -nephews, extended family, church family and a host of friends who loved her dearly. Funeral service for Mrs. Sharron Dennehy will be at 11:00am, Saturday, January 12, 2019 at Max Slayton Funeral Chapel with interment to follow at Oakland Memorial Park. Family will receive friends 6-8pm, Friday, Jan. 11, at Max Slayton Funerals and Cremations. Proverbs 31:28-30 28 Her children arise and call her blessed; her husband also, and he praises her: 29 “Many women do noble things, but you surpass them all.” 30 Charm is deceptive, and beauty is fleeting; but a woman who fears the Lord is to be praised.

Sharron Dennehy, of Terrell, passed away peacefully into the presence of her Savior on the evening of January 7, 2019 surrounded by her family. She was born July 5, 1944 in Vernon, Tx. Sharron was preceded in death by her father Emerson Durwood... View Obituary & Service Information

The family of Sharron Dennehy created this Life Tributes page to make it easy to share your memories.

Sharron Dennehy, of Terrell, passed away peacefully into the...

Send flowers to the Dennehy family.