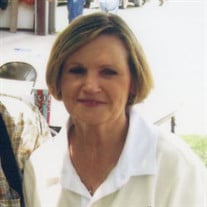 Shirley Fay Harwell, longtime resident of Terrell, passed away peacefully on March 31, 2018 with her family at her side. She was welcomed into Heaven by her beloved husband, Rayford who, no doubt, was waiting with that special smile he always had just for her. Shirley was also reunited with her parents Jim and Grace Taylor, parents-in-law, Jim and Lola Harwell, brothers: Lumpy and Oscar Taylor; sister, Yvonne Lyon; brother-in-law, Dennis Harwell and wife Libby; sister-in-law, Patsy Harwell; brother-in-law, David Cox; niece, Deborah Crow, and nephews, C.J. Taylor and Jason Taylor. Shirley was born September 27, 1943 in Kaufman County, Texas. She attended Kaufman public schools and graduated from Canton High School in 1963. She met Rayford Harwell and on Sept. 25, 1964 they married and were inseparable until his passing on Dec. 6, 2015. Shirley was a beautiful feature in the Terrell community helping Rayford with the businesses that they owned together. Not only did she keep the finances in line by doing the bookkeeping at the station, she also kept Rayford in line and later, their son, Cary! So much was her ability to keep the business running smoothly, she was lovingly (but respectfully) known as “Hitler”. Shirley also found it very humorous, and very flattering, to be known by her other names: “Rayford’s wife” or “Cary’s mother”. She held these two titles dearest to her heart and her love and devotion to Rayford and Cary are true testaments to what a wife and mother should be. Shirley loved bowling and was a member of several bowling leagues in Terrell including the Coffee Cup league and Traveling League. Her loving and generous heart was always evident and she volunteered for over 25 years with Terrell State Hospital and was active with the Terrell Pilot Club. She loved working in her yard and she truly enjoyed growing gorgeous flowers. Shirley was content to always support others in their endeavors "behind the scenes" yet, somehow, she never escaped others' notice. Her grace, elegance and calm countenance at all times gave all who met and knew her an indescribable sense of peace. Getting to visit with Shirley made each person feel encouraged and treasured and she will be missed greatly for the quiet strength and devotion that she demonstrated every day of her life. Shirley leaves to cherish her memory her son, Cary Harwell; brother, George Taylor and wife, Terri Ann, of Elmo; sisters: Dorothy Crow of Kaufman, Leona Harwell of Garland, Betty Gutierrez and husband, Leonard of Mineola; sisters-in-law: Donna Harwood of Kaufman, Beverly Taylor of Rowlett, Nadine Day and husband, Jerrell, of Terrell, Linda Taylor of Forney, Charlotte Corley of Longview; brothers-in-law: James Harwell of Terrell, Joe Harwell and wife Claudette, of Greenville, Gary Harwell and wife, Linda, of Van; special family friends, Jerry Clower and wife, Barbara, of Wills Point as well as several nieces, nephews, extended family and a host of friends. Celebration of Shirley's life will be at 11:00am, Saturday, April 7, 2018, at Terrell's First Assembly of God Church, 203 Main St., Terrell. Shirley's family asks that, in lieu of flowers, donations be made to Relay for Life in support of the American National Bank Team (mail: PO Box 40, Terrell, 75160) and/or the City of Terrell Team (mail: 301 E. Nash, Terrell, 75160) or donate online at: http://main.acsevents.org/site/TR?fr_id=88398&pg=team&team_id=2244576 Memorials may also be made to support the Weaver Cemetery Association, a place that was very dear to Shirley and Rayford's hearts, 4699 VZCR 1507, Grand Saline, TX, 75140. Condolences and stories may be shared with the family at www.maxslaytonfunerals.com.

Shirley Fay Harwell, longtime resident of Terrell, passed away peacefully on March 31, 2018 with her family at her side. She was welcomed into Heaven by her beloved husband, Rayford who, no doubt, was waiting with that special smile he always... View Obituary & Service Information

The family of Shirley Harwell created this Life Tributes page to make it easy to share your memories.

Send flowers to the Harwell family.