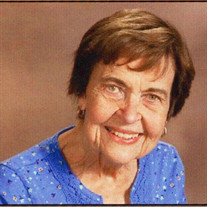 Shirley Bryant Wright, formerly of Terrell, passed away peacefully on April 5, 2020. Shirley was born Dec. 8, 1921 in Detroit, Tx to Wallace and Airry Bryant, both of whom were there to welcome her into Heaven along with her many brothers and sisters and her beloved husband, A.L. Wright, who passed on Feb. 20, 2014 after 71 years of marriage together. Shirley grew up and attended schools in Detroit and Deport, Tx, both little towns outside Paris. She then attended and graduated from Paris Junior College and then East Texas State Teachers College (now Texas A&M-Commerce) where she received her bachelor’s in science degree. Shirley began her teaching career in a small two room schoolhouse in the Hoovertown Community near Deport, Tx from 1942 to 1943. She then moved to the Crandall ISD school district in 1950 and worked there until 1970 where she taught high school English and then, later, began teaching 3rd grade. Shirley’s career took her to the Terrell ISD in 1970 where she again taught 3rd grade after which she became a reading specialist for the various campuses. In 1982, after almost four decades of dedicated service to students, parents and fellow teachers, Shirley retired to spend more time with her beloved husband and family. Shirley was a member of First Baptist Church in Terrell where she and A.L. had many treasured friendships. She also was a member of several groups including the Red Hat Society, Terrell Book Club and the Retired Teachers Association. Her faith for her Savior and her love for her family were the priorities in Shirley’s life but her enjoyment of getting to know her students and their families and build lifelong relationships were surely very important to her as well. Many students to this day credit Mrs. Wright with their love of reading and their accomplishments when they, with her gentle help and support, achieved their goals. A beautiful woman, inside and out, Shirley will be greatly missed by not only her family but also the many lives that she impacted in her calling of being a teacher. Shirley leaves her memory to be cherished by her daughter, Sandra Lee Wright McDonald and husband, Jack, of Snyder, TX; grandchildren: Sara Elizabeth McDonald Youd and husband, Chris, of Atlanta, GA; sister-in-law, Dorothy Minter of Midlothian, VA as well as numerous nieces, nephews, great-nieces and -nephews, extended family and a host of friends both near and far. A private graveside service will be held at D/FW National Cemetery where Shirley will be laid to rest with her beloved husband. For those who wish to make a donation in memory of Shirley’s heart for others, memorials may be given to the Samaritan’s Purse, at www.samaritanspurse.org .

Shirley Bryant Wright, formerly of Terrell, passed away peacefully on April 5, 2020. Shirley was born Dec. 8, 1921 in Detroit, Tx to Wallace and Airry Bryant, both of whom were there to welcome her into Heaven along with her many brothers and... View Obituary & Service Information

The family of Shirley Wright created this Life Tributes page to make it easy to share your memories.

Send flowers to the Wright family.