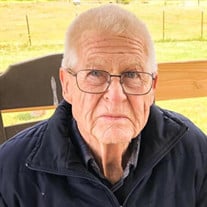 ***Funeral Service will be livestreamed at 10:30 a.m. Wednesday, April 28, 2021*** Steven Wayne Martin was born in Dallas, Texas, on February 4, 1947. He grew up in Forney, Texas, graduating from Forney High School in 1965. He married his high school sweetheart, Sharon Lerlene Kinsey, on September 4, 1965 in Forney, Texas, with Brother Jerry Griffin officiating. Steve and Sharon had two children, Steven Dale born December 23, 1966, and Sharon Denise born June 12, 1969. Steve owned and managed the Forney Supermarket for 11 years as well as the Crandall Supermarket for a number of years. After 1986, he was a bookkeeper for Everett Truck Sales in Forney and then was a bookkeeper for his nephew’s, Wayne Black, Jr., plumbing company in Forney before retiring at the age of 64. Steve was a member of the First Baptist Church of Forney and he also served as a Forney councilman and a Forney Volunteer Fire Dept Chief, as well as a Reserve Deputy Sheriff for Kaufman County. Steve had a heart for taking care of people, especially family members or friends in need and the elderly. Honestly, he loved to help anyone in need. Steve and Sharon raised his nephew, Kevin Dale Jones, for several years like he was their own. Kevin said that Steve taught him many things and lots of sayings but the one that is his favorite is, “It doesn’t matter what you are as long as you are good at it.” Steve and Sharon took in various friends and family through the years, including whole families sometimes, to live with them during various challenges or changes in that family or individual’s life. His son, Dale, remembered that he had seen his Dad give away an enormous amount of free groceries through the years. Steve would also take groceries or supplies to the elderly or disabled, check on people who did not have family that visited or helped, doing repairs when he could, wrapping their pipes in the winter or any number of things that required help or repair. Sharon recalled a story of one of the older ladies in Forney that Steve helped often asking if he knew anyone who could do ironing for her. He told her that he found someone, and he just started bringing the ironing home to his wife Sharon! Steve had an incredible memory for events and if someone could not remember how or when something happened, they knew they could just ask Steve. He was also known for telling jokes and funny stories. He never met a stranger and loved to truly get to know people everywhere he went. Steve was preceded in death by his father and mother, William Carol Martin and Fairy Eldis Kemp Martin of Forney, sister, Betty Sue Martin, and brothers, Royce Dean Martin and Randall Lloyd Martin. Steve is survived by his wife of 55 years, Sharon Martin; sisters: Peggy Black of Forney, and Jodie Loftis of Eustace; brother, Jerry Dennis Martin of Scurry; son, Dale Martin and wife, Melendy, of Cleveland, Tennessee; daughter, Denise Reed and husband, Trent, of Kemp; six granddaughters: Cassie Marie Martin, Sharon Taylor Sparks and husband Eric, Audrey Kay Challender and husband Alex, Shelby Tanner Hevener and husband Dustin, Erica Janelle Reed, & Sarah Marie Reed; one grandson, Steven Nathaniel Martin; three great grandchildren: Evelyn Rose Challender, Eric Leonidas Sparks and Sebastion Allen Swanson as well as numerous nephews, nieces and cousins, other extended family and a host of friends. Funeral service will 10:30 a.m. Wednesday, April 28, 2021 at Max Slayton Funeral Chapel with an interment following at Hillcrest Cemetery in Forney. Steven's family will receive friends 6 p.m. to 8 p.m. Tuesday, April 27, 2021 at Max Slayton Funeral Chapel.

The family of Steven Wayne Martin created this Life Tributes page to make it easy to share your memories.

Send flowers to the Martin family.