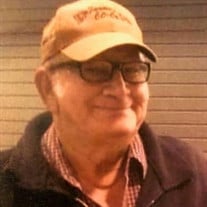 T.M. “Jackie” Cookston, of Terrell, passed away peacefully at home with his family at his side on the morning of Jan. 16, 2020. Jackie was born April 16, 1938 in Royse City, TX to Walter and Lois (Hicks) Cookston, both of whom preceded him in death. Jackie grew up in Royse City and graduated from Royse City High School. He worked in Terrell where he saw Shirley Killian walking by one day. They began dating and within 6 months, they were engaged and married 2 years later on June 17, 1960 at Rockwall and Brin Church of Christ. Jackie was an active member of Rockwall and Brin as well as a frequent volunteer with the Share Center for many years alongside Shirley until his health began to decline. He worked for Texas Aluminum and then with his father-in-law at Killian’s Shoe Shop in downtown Terrell. After his father-in-law retired, Jackie owned and operated Cookston’s Shoe Repair out of his home in Terrell. Jackie also worked for, and retired from, Madix after many years of dedicated employment. His favorite places to be were at home and on a tractor spending many happy hours farming, mowing, baling hay and taking care of his horses as well as providing farming services to other residents to help them mow and bale and farm. He and Shirley were often seen around town especially at Terrell Café where they would share a meal and most mornings (6 out of 7!) Jackie could be found drinking coffee at the Café visiting with the many friends who joined him each morning. His sense of humor was one of a kind and his wisdom and experience in the weather, farming, livestock, shoes and welding were valuable insights that his children, friends and the community respected and prized. His smile and contagious laugh will be missed by so many and Jackie definitely made days better for all who knew and loved him. Jackie is survived by his beloved wife of almost 60 years, Shirley Cookston, of Terrell; children: Tommy Cookston and wife, Diane, of Terrell, Sheryl Gray and husband, Andy, of Terrell, Sherry LaRue and husband, Ricky, of Quinlan, Jack Wesley Cookston and wife, Diane A. of Terrell, and Shanan Cookston Kohls of Terrell; grandchildren: Jeff Cookston and wife, Amanda, Matt Cookston and wife, Kristi, Josh High, C.J. Payne and husband, Houston, Janette Wilde and husband Michael, Andrea Gray, JW. Cookston, Wade Cookston, Wyatt Cookston, and Colton Kohls; great grandchildren: Kara, Jeffrey, Brant, Rylee, James, Norah, Claira, Drew, Grace, and Thomas; brother, W.L. Cookston as well as nieces, nephews, numerous extended family, church family and a host of friends. Funeral service will be 10:30 am, Monday, January 20, 2020, at Rockwall and Brin Church of Christ with interment to follow at Highland Memorial Gardens. Family will receive friends Sunday, January 19, 2020, from 4:00 pm to 6:00 pm at Max Slayton Funerals and Cremations. For those wishing, the family suggests memorials be made in honor of Jackie to the Share Center, 103 Jones St., Terrell, 75160 or at https://terrellsharecenter.org/ .

The family of T. M. "Jackie" Cookston created this Life Tributes page to make it easy to share your memories.

T.M. “Jackie” Cookston, of Terrell, passed away peacefully at...

Send flowers to the Cookston family.