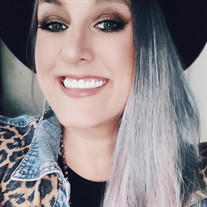 Taylor Dawn Carroll “Taylor Dee” went to see Heaven’s much Greener Grass in the presence of her Lord and Savior on March 14, 2021. She was born July 16, 1987 in Garland, Texas to Jimmy Glenn Carroll and Karla Dawn Littrell, beloved daughter who lit up the room with her smile from the moment she entered the world. Taylor started as a musician at the age of 12 when she was accepted in the All-State Regional Choir, a candidate among Taylor had a passion for singing and knew that would be her career even at a young age. It was no secret to Taylor’s fans that she faced several difficulties growing up. Music was a healing force for her and she used her experiences to help others through not only her original music compositions but also with personal connections shared with each of her fans. After high school, Taylor joined a band and would go on to try out for American Idol and The Voice but it was not her time to shine just yet with those outlets. Not letting anything get her down or stop her dream, Taylor was consistent in building her song collection and her entertainment contacts. It was not until 2017 when Taylor moved back home to help her family that she caught her big break! She met the people who would not only be pivotal in growing her career but also would grow with her and help her record her first full album ‘The Buzz’ in 2019. This record’s title track would also be Taylor’s first radio release and is still being heard on several country radio stations in Texas. ‘Taylor Dee’ as she would become known to the public was ‘skyrocketing toward stardom’ performing award winning songs such as, “Greener Grass” and “Top Shelf Liquor” as well as holding several notable spots on Texas Country Music Charts. Taylor quickly gained recognition from her peers with her amazing voice, mesmerizing performances, and the ability to tell her story through music. Taylor’s striking Janis Joplin-style voice really set her apart from the rest of the performers today. Anyone who met Taylor felt they had known her their whole lives. She loved people, never meeting a stranger she always had a huge smile. Taylor Dee was a member of several state and national music associations including: Ambassador of Global Country Music Association, Texas Country Music Association, Nashville Recording Artists, Top Shelf Talent, and Seventh Planet Entertainment Group and received the Josie Award for Female Singer in Modern Country Category in 2020. Taylor Dee was not just a rising country star, she was also a mom and had two beautiful children, Vayden and River who inspired her daily to do what she loved and make her dream come true. Taylor leaves behind her loving partner, Aron Barkley; sweet son, Vayden Cash; loving daughter, River Monroe, all of Farmersville, TX; mother, Karla Van Syckle and husband, Jay of Rockwall; father, Jimmy Carroll and wife, Diane, of Elmo; brothers, Chad Carroll of Rockwall and Carey Davis of Terrell; sister, Danielle Riley of Kaufman; nephews: Axl, Lane, Lucius; nieces, Alena and Madisyn as well as several extended family members and many other in the Texas Country Music community who will all miss Taylor Dee’s bright smile and captivating voice. Funeral service will be held 1 p.m. Wednesday, March 24, 2021 at Max Slayton Funeral Chapel. Her family will receive friends beginning at 12 p.m. to service time.

The family of Taylor "Taylor Dee" Carroll created this Life Tributes page to make it easy to share your memories.

Send flowers to the Carroll family.