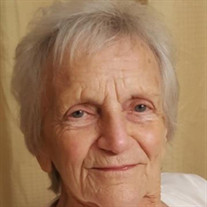 Thelma “Sweetie” Carver, longtime resident of Terrell, passed away on Aug. 23, 2020 in Rowlett. Thelma was born September 20, 1940 in Elmo, TX to Troy D. and Celia D. Jacobs, both of whom preceded her in death along with her beloved husband, Leslie “Peanut” Carver and sisters: Violet Elliott, Bette Holloway, Glenda Flouney, and brother David JR “June” Jacobs. Thelma spent her whole life living in Terrell and she met and married Leslie “Peanut” Carver in 1959. They both worked at the Terrell Boot Factory for few years until its closing. Peanut then began working at Titus Aluminum Plant in Terrell and, after the birth of their son Ty, he asked Thelma to apply at Titus where she started out “on the assembly line” and then was promoted along the way to Supervisor of Shipping. Thelma was the first female worker “on the workroom floor” as well as the first female foreman at the company and her abilities in organization and efficiency enabled her to become one of the most valued and loyal employees for over 30 years. Often, Thelma would say that she had supervised nearly everyone in the surrounding four counties and her ethical leadership was remarkable with many remembering her for years after. Often, after leaving Titus, people would speak to her in the grocery store or in town with her children asking, ‘Who was that?’ and Thelma’s reply was always, ‘Someone I worked with at “The Plant”’. Thelma’s life was spent with a love for working and being productive so she set her mind to work for Wal-Mart. She insisted that she did not want to work at the Terrell store because she knew too many people in Terrell and they would want to talk and, she wouldn’t be able to get her job done. She became employed at the Mesquite Wal-Mart where she was a groceries returns restocker . It was commonly said that when Thelma took a week’s vacation (which was not very often), Wal-Mart had to assign three associates to do the work of one Thelma! She retired from the Mesquite store after 25 years of dedicated service. In the early years of their marriage, her husband Peanut’s hobby was stock car racing where he won many trophies and championships at several East Texas dirt tracks. Not to be out done, Thelma won a couple of her own first place Powder Puff trophies! In the 1970’s, she and Peanut embarked on their next shared hobby with farming and ranching so they moved out to the High Point community. Sweetie and Peanut were frequent sights at local rodeos and livestock shows, helping their children with competitions and showings. She and Peanut were always actively supporting and helping their children with all their interests and activities. Peanut and Sweetie devoted their life to their first grandson, Wacey. They were there every weekend to pickup Wacey to have new adventures. After Peanut’s passing in 1991, Thelma continued, with the help of Ty, ranching and babying her cows, working the land, helping with 4H, going to the feed store, all while still working a full time job. Twice weekly, she would haul 50-pound bags of ranch cubes to the feed trough to get the cows to come up and visit with her! She kept this activity up until her hip gave out at 76, but she stayed sharp by always being interested in her kid’s, her grandchildren, and great grandchildren’s lives. A lady with the highest work ethic, a devotion to her family and a wonderful caretaker of her land, Thelma will be greatly missed by all who knew her. Thelma is survived by her children: Debbie David and Ty Carver and wife, Olga; 6 grandchildren: Wacey Johnson(Laine), Finessa Johnson(Jonathan), Wade Johnson, Tess Carver and Shelbie Brown and Britini Valkenaar(Steven); 11 great grandchildren as well as several nieces, nephews, extended family and many friends. A graveside service will be at 10:30am, Wednesday, Aug. 26, 2020 at Highland Memorial Gardens where Sweetie will be laid to rest beside Peanut. The family will receive friends 5:00pm to 7:00pm, Tuesday, Aug. 25, at Max Slayton Funeral Chapel. The family asks that in lieu of flowers, donations be made to the Alzheimer’s Association at www.alz.org.

The family of Thelma "Sweetie" Carver created this Life Tributes page to make it easy to share your memories.

Send flowers to the Carver family.