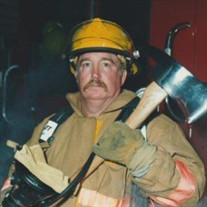 Thomas Wayne Cheney of Poetry, peacefully passed away of complications of COVID at Texas Health Resources-Presbyterian Hospital of Rockwall on Saturday, October 2, 2021. Tom was born in 1948 to Bascom and Corine Read Cheney in Tyler County, Texas. He was placed in the Buckner Children’s Home of Dallas at the age of eight. The Roland Family of Forney sponsored Tom so he moved to Forney in 1964. On February 10, 1968, he married Cecelia (Cissy) Rhodes of Forney. Together, they lovingly raised their son, Tim and daughter, Anne. Tom became “my Papaw” in 1992. Over a span of twenty fours Tom was blessed with five grandchildren and five great-grandchildren. Tom hired on with the City of Mesquite Fire Department in February 1970. These firefighters, worked, lived and pranked together just as a family would do. He retired as a paramedic in 2000. Thomas was preceded in death by his parents, Bascon and Corine. He lost four older brothers, Harold, Allen, Raymond and Stewart as well as an older sister, Betty. Thomas is survived by his wife, Cecelia (Cissy), their son Tim, wife Bobbi and their daughter Kelci and husband Beau. Their son Hunter (third generation firefighter) and fiancée, Lori to be married next year. Tom’s daughter, Anne and her three children miss him desperately. Tom was a bigger than life presence in their lives. Evan learned the make-shift fixes well from his Papaw. Evan blessed his grandparents with the three oldest great-grandchildren, Fallon, Hadlee and Kash. Katelyn, granddaughter gave him his joy, Ryleigh and Jaxson. Last but not least was the youngest, Will (William Thomas) his namesake and fiancée, Olivia are to be married in 2022 also. Tom’s older sister, Louise and brother-in-law, Jim O’Reilly reside in Garland. The youngest brother, Roger and sister-in-law Jeanie live in Mesquite. Tom’s baby sister, Linda and brother-in-law, Rickey Touungate settled in Rockwall. Tom has numerous cousins among them is his Facebook cousin, Joann and her husband, Ed. His many nieces and nephews are scattered throughout the South but some have kept in touch through messenger and Facebook. Graveside service will be at 11:00am, Saturday, November 6, 2021 at Hillcrest Cemetery officiated by Chaplain Austin Holt and honors to be rendered by Mesquite Fire Department. In lieu of flowers, memorials may be made to Mesquite Firefighters Association Nonprofit Fun, that gives towards our scholarships and the firefighter relief fund, which helps FFs who are facing some hard times. Donations can be mailed to: Mesquite Firefighters Association Nonprofit 317 S. Galloway Ave, Ste. A, Mesquite, TX, 75149-4613 or to Hillcrest cemetery Association, PO Box 1033 Forney, Tx 75126.

Thomas Wayne Cheney of Poetry, peacefully passed away of complications of COVID at Texas Health Resources-Presbyterian Hospital of Rockwall on Saturday, October 2, 2021. Tom was born in 1948 to Bascom and Corine Read Cheney in Tyler County,... View Obituary & Service Information

The family of Thomas Wayne Cheney created this Life Tributes page to make it easy to share your memories.

Thomas Wayne Cheney of Poetry, peacefully passed away of complications...

Send flowers to the Cheney family.