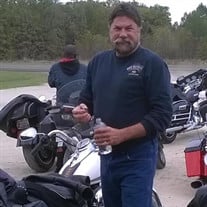 Tim Sinnott, of Terrell, passed away on December 8, 2019 doing what he loved-riding his motorcycle and enjoying the evening air. Tim was born Jan. 11, 1958 in Toledo, OH to Edward and Paula Sinnott, both of whom preceded him in death. Tim grew up in Pennsylvania and graduated in 1977 from Gateway Senior High School in Monroeville, PA after which he graduated from Vale Tech specializing and developing his skills for automotive repair and restoration. Tim loved cars and had been an avid collector since the age of 15 and he developed a lifelong love of motorcycles as well. The freedom he felt on his bike was a feeling he readily shared with friends and family and he loved being able to travel and showcase his vehicles and bikes. He moved to Texas and lived around the Dallas area in the mid 1980s working with several automotive and transportation companies. In 2009, Tim moved to Terrell where he could enjoy more fully the outdoors that he loved so much. Tim received his CDL and his attention to detail and safety made him a valuable employee with JB Hunt and TMC Transportation. When not driving over the road or working on cars and motorcycles, he could be found spending time with his daughter, working on his or a friend’s vehicle, fishing and making plans to spend time with his many friends on road trips and other spur-of-the-moment excursions. Always a man to learn more, Tim developed his talent at marksmanship with certification through the NRA as Marksman, Marksman 1st Class and finally, Sharpshooter. He pushed himself to accomplish more in that he recognized that a person can always be better with more knowledge. In 2018, Tim fulfilled his dream by opening his own auto repair facility with the plan of helping others and appreciating the finer details of automotive and motorcycle restoration. His spectacular talent of rebuilding and fixing vehicles earned him a valuable reputation as a “go to” guy for restoring cars and bikes. Of all the interests and livelihoods that Tim became involved in, his favorite was to be a devoted dad to his beautiful daughter, Nicole. He made sure to tell her on so many occasions how much he loved being her dad and Tim would often share with whoever he was talking to about how proud he was of his daughter. A devoted father, a trusted friend and steadfast man, Tim will be missed by all who knew him especially his daughter. Tim leaves to carry on his legacy of love to his daughter, Nicole Sinnott of Dallas; siblings: Amy McGee, Patrick Sinnott, Laura Sinnott and Michael Sinnott as well as several nieces, nephews, extended family and a host of friends who loved him dearly. A Celebration of Tim’s life will be held at 5:00pm, Friday, December 13, 2019 at Max Slayton Funeral Chapel where all are invited to share memories and stories of how he has impacted so many lives for the better. The reception will be held at The Side Street 106 S. Adelaide immediately following the memorial service.

Tim Sinnott, of Terrell, passed away on December 8, 2019 doing what he loved-riding his motorcycle and enjoying the evening air. Tim was born Jan. 11, 1958 in Toledo, OH to Edward and Paula Sinnott, both of whom preceded him in death. Tim... View Obituary & Service Information

The family of Tim Sinnott created this Life Tributes page to make it easy to share your memories.

Send flowers to the Sinnott family.