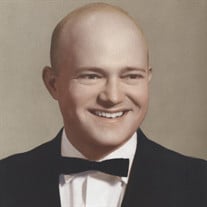 Olan Thomas DeGaugh (Tommy), passed away Feb. 18, 2020 in Dallas. Tommy was born Aug. 21, 1938 in Dallas, TX to Olan and Lena Mae (Boyd) DeGaugh, both of whom welcomed him into heaven along with his son, Richard Bryan DeGaugh. Tommy was born in Dallas and spent most of his life there. He attended, and received his Bachelor’s degree, from North Texas State University (now UNT) after which he began studying at Baylor University for his Masters. Tommy had an entrepreneurial mind and he earned his own income early in life by having a paper route with the Dallas Morning News. Later, he owned and operated Dee’s Parking in downtown Dallas for many years where he had a front row seat in seeing all the growth and improvements to the historic downtown area. Later, Tommy went to work for UPS at D/FW International Airport where his strong work ethic and ‘tough as nails’ character earned him the respect and admiration of his colleagues and supervisors. He enjoyed quiet hobbies like collecting trains - which he started collecting at seven years old. He was an avid traveler who loved embarking on new journeys. He delighted in flying to new locations where he could enjoy the beauty of God's creation. He spent much time on his property in Palestine, Texas. He was also proud of his inherited family farm in the Blackjack Community which has been in his family since the 1880s. A strong man of his faith and a fighter for all that he believed in, Tommy will be greatly missed by family and friends, all of whom loved him very much. Tommy is survived by his son, Timothy Todd DeGaugh and daughter-in-law, Christy, and their children, Brandon and Lucas; and his son, Curtis Thomas DeGaugh and daughter-in-law, Sharon, and their three children, Hosanna, Ezra, and Jubilee. He is also survived by his sister, Pauline Dianne Hawthorne; nephew, David Hawthorne and wife Kimberly and their two children Robert and Christopher; niece, Linda Hawthorne and children Kimberly and Andrew, and many other beloved extended family and friends. Funeral service will be at 1:00pm, Monday, Feb. 24, 2020 at Community Bible Chapel, 418 E. Main St, Richardson, TX, 75081. Graveside service will follow at 4:00pm at Oakland Memorial Park in Terrell, TX. The family asks that memorials be made in honor of Tommy to the American Heart Association at www.heart.org.

Olan Thomas DeGaugh (Tommy), passed away Feb. 18, 2020 in Dallas. Tommy was born Aug. 21, 1938 in Dallas, TX to Olan and Lena Mae (Boyd) DeGaugh, both of whom welcomed him into heaven along with his son, Richard Bryan DeGaugh. Tommy was born... View Obituary & Service Information

The family of Tommy DeGaugh created this Life Tributes page to make it easy to share your memories.

Send flowers to the DeGaugh family.