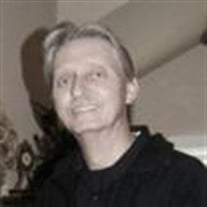 Van Alexander Crane, formerly of Terrell, passed away on May 17, 2020 at his home in Kaufman. Van was born November 6, 1954 in Terrell, TX to Herman and Jimmie Marie (Terry) Crane, both of whom preceded him in death along with his brother, Ruddy Crane. Van grew up in Terrell and was a 1973 graduate of Terrell High School after which he attended Henderson Co. JC (now TVCC). He had a membership with Cornerstone Baptist Church in Terrell. He loved music and, early in life, he found a talent for singing country and western songs. He and several friends would regularly form bands where they would play for other friends, family, gatherings and get togethers. He made a livelihood of music and for the rest of his life he would sing at local clubs including Silver Spur at Lake Tawakoni and at the Longhorn Ballroom in Dallas. Van’s gift for singing was evident throughout his career even allowing him to open for Ray Price. He loved to entertain and when not booked for shows, Van would be one of the performers with the Wild West gun shows where he could be counted on to give the Six Flag visitors the most authentic and one-of-a-kind entertaining experience. A man who would always go the extra mile to be on the stage, his talent and friendship will be greatly missed. Van is survived by his longtime companion, Nona N. Smith; children: Stephanie Miller and husband, Ben, and her son, Ty McSpadden, Sarah Ashely Dye and husband, Wesley, Jennifer Erin Crane, and Jason Lamar Crane; grandchildren: Jaden Crane, Jackson, Knox and Maxwell Dye, and Conner Crane; sisters: Trecia Gispanski and husband, Robert, and Gita Crane; nephew, Ruddy Crane as well as several other nieces and nephews, extended family and a host of friends. A graveside service will be at 2:00pm, Thursday, May 21, 2020 at Oakland Memorial Park. Family will receive friends 5:00pm to 7:00pm, Wednesday, May 20, at Max Slayton Funerals and Cremations.

Van Alexander Crane, formerly of Terrell, passed away on May 17, 2020 at his home in Kaufman. Van was born November 6, 1954 in Terrell, TX to Herman and Jimmie Marie (Terry) Crane, both of whom preceded him in death along with his brother, Ruddy... View Obituary & Service Information

The family of Van Crane created this Life Tributes page to make it easy to share your memories.

Van Alexander Crane, formerly of Terrell, passed away on May...

Send flowers to the Crane family.