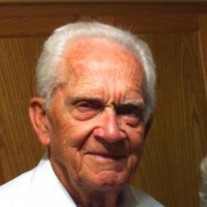 Vester “Ves” Johnson Turner Jr. was born on April 22, 1935, to Vester Johnson Turner Sr. and Lillian Gracie Rush in Terrell, Texas. Vester attended schools in Shreveport, LA, and then in Terrell where he met the love of his life, Wynona Kay “Tootsie” Smith, and they were married on August 4, 1956. Everyone that knew Vester was made aware of the loves of his life: His Lord Jesus Christ, His beautiful wife and sweetheart Tootsie, his growing family, and his career with the Air Force. Vester never met a stranger and was a loyal and generous friend to many. He had a big heart and freely gave his love and kindness to each. He was proud of his country and was always eager to share the gospel of Jesus Christ. Pop was always there for his kids and grandbabies, offering help, advice, love, cookies and anything else you needed. No one could every say or do anything against his sweetheart. She was the queen of his world and he made it known. Vester enjoyed automobiles and airplanes from his youth. He was in the Texas Army National Guard, serving at the Terrell Nike Base B Battery 4th Missile Battalion 132nd Air Defense Artillery Tx NG from 1963 to 1968. He then enlisted in the 136th Tactical Airlift Wing (TAW) of the Texas Air National Guard at Hensley Field, Grand Prairie from 1968 to 1992. He worked as an airplane mechanic, served in refueling missions during the Vietnam War, and then received his degree as a flight engineer on the C-130 Hercules. Vester served in Operation Desert Shield and Operation Desert Storm from August 1990 to April 1991, where his plane was the first plane to enter Baghdad to carry in troops during the Desert Storm Invasion. He retired on April 22, 1995 from the Armed Forces of the United State of America, and then began multiple jobs including 911 mapping for Kaufman and Hunt Counties, Door Greeter at Walmart, Pharmacy deliveries for Bass Rutledge Drug Store, and finally mapping for Kaufman County Precinct 3, where he retired in January, 2017. Vester was an active member of Emmanuel Baptist Church, and has served faithfully over the years as a deacon, Sunday school teacher, and on occasion giving Sunday messages. He loved his church family, and especially loved his talks about scripture with Brother Billy Martin. He was proud to serve his church family, and always overjoyed to teach or share the gospel. He especially loved reading and sharing the writings of J. Vernon McGee, and provided his family with copies to help them grow in their spiritual walk, which was his greatest joy and desire. Vester, Ves, Daddy, or Pop, however he was known, will be greatly missed. He was welcomed into heaven by his father and mother, Vester & Lillian Turner. Those left to celebrate his life are: His bride of 60 years, Wynona “Tootsie” Turner; Daughters: Kandy Horn of Rockwall, TX and her daughter Marcella Viktorin of Austin, TX; Catherine “Cathy” Boyd and husband Scott Boyd of Terrell and their family, Courtney and Zach Webb of Terrell, Zachary “Zach” and Amber Boyd and children Addison and Paisley of Wills Point, TX; Zane and Amy Boyd and children Alex and Tripp of Edgewood, TX; Donna McHone and husband Mark McHone of Rockwall, TX and their family, Jordan and Samantha McHone and children Sean and Ryan of Okinawa Japan, Evan and Shantelle McHone of Rogers, AR, Ainslee and Derek DeMars of Rockwall, TX, and Mark Hayden McHone of Rockwall, TX; His sister Frances Hall of Peeltown, TX; a host of brothers and sisters-in-law, aunts, uncles, cousins, nieces, nephews, neighbors, co-workers, church family members, and each one a special friend. Funeral services will be 11 a.m. Saturday June 24, 2017 at the First Baptist Church 403 N. Catherine Terrell with interment to follow with full military honors at Oakland Memorial Park. Family will receive friends Friday June 23 from 6 p.m. to 8 p.m. at Max Slayton Funerals and Cremations. Condolences may be left at www.maxslaytonfunerals.com SECOND TO NONE

Vester &#8220;Ves&#8221; Johnson Turner Jr. was born on April 22, 1935, to Vester Johnson Turner Sr. and Lillian Gracie Rush in Terrell, Texas. Vester attended schools in Shreveport, LA, and then in Terrell where he met the love of his life,... View Obituary & Service Information

The family of Vester Johnson Turner Jr. created this Life Tributes page to make it easy to share your memories.

Send flowers to the Turner family.