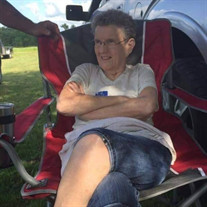 Mrs. Vicki Mosley, formerly of Terrell, passed away June 24, 2021 at her home in Grand Saline. Vicki was born in Terrell to Onie, Sr. and Myrtle Simpson, both of whom preceded her in death along with her husband, Richard Mosley, and brothers, Onie, Jr. and Harold Simpson. Vicki grew up in Terrell and graduated from Terrell High School in 1970 and she worked at Brookshires for over 25 years in Terrell and Rockwall where her friendliness and smile made shoppers feel right at home. Vicki then worked for Terrell ISD for many years until her retirement in 2010. She and Richard moved to Grand Saline to enjoy peaceful country living where she was also able to enjoy her favorite pastime-fishing! Shopping was also another fun activity that she looked forward to and she had many favorite memories picking out the perfect treasure for others, and even on a rare occasion, herself. Vicki was a devoted mother and grandmother and as her family grew to include the many grandchildren and great grandchildren, the love she had for them also grew abundantly. Her loving personality and incredible generosity were constant joys to all who knew Vicki and she will be greatly missed. Vicki is survived by her sons: Bryan Mosley of Elmo, Brad Mosley of Grand Saline, Matt Mosley and his wife Monica of Wills Point and god-son, Lonnie Mosley; grandchildren: Dalton, Colby, Megan, Macey, Kellsie, Blaine, Taylor, Tristen and Alexis; great grandchildren: Cooper, Walker, Maverick and Raylen; sister, Lois Pierce and husband, Lem, as well as numerous nieces, nephews many other relatives and a host of friends. A graveside service will be at 11:00am, Tuesday, June 29, 2021 at Elmo Cemetery where she will be laid to rest next to her beloved husband, Richard, who preceded her in death in 2016.

Mrs. Vicki Mosley, formerly of Terrell, passed away June 24, 2021 at her home in Grand Saline. Vicki was born in Terrell to Onie, Sr. and Myrtle Simpson, both of whom preceded her in death along with her husband, Richard Mosley, and brothers,... View Obituary & Service Information

The family of Vicki Mosley created this Life Tributes page to make it easy to share your memories.

Send flowers to the Mosley family.