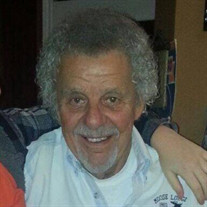 Vincent “Vinny” Jaroszewski passed away September 18, 2020. He was born October 18, 1936 in Chicago, Ill. to Vincent and Jane (Rutkowski) Jaroszewski, both of whom welcomed him into Heaven along with his siblings and their spouses: Dianne Jaroszewski Hope and husband John, Jimmy Jaroszewski and wife, Josephine, and Susanne Jaroszewski Knafelz. Vinny was a proud veteran having served in the US Air Force during the Korean War. He enjoyed people and being around people which led to his success as a career bartender with several restaurants and casinos. He had recently moved from Arizona/Las Vegas to Texas to be nearer to his family and enjoyed making more memories with each of them. Vinny was a member of the VFW, American Legion and Moose Lodge where he loved to play pool with others and in tournaments, even securing a spot in a national competition which included a free trip to Las Vegas! He was an avid WWII history buff. Vinny was also an active golfer and made many friends at the courses. As much as he enjoyed life, Vinny’s true happiness was being a father, grandfather, great grandfather, brother, and uncle to his family. He made sure to stay in contact with all of his nieces and nephews as they grew up and began their own lives. His fun, loving personality made him their favorite “Uncle Vince”. A wonderful and kind man with a smile, story and jokes for all who met him and all who knew him. Vinny will be greatly missed by the many whose lives he touched. Vinny’s memory will be forever cherished by his children: Michael Jaroszewski and wife, Elaine, and Judy Jaroszewski Coats and husband, Randy and grandchildren: Ryan Coats, Neil Coats, Morgan Jaroszewski, and Jordan Jaroszewski. Vinny was also a beloved grandfather to his bonus grandchildren: Amber Coats and Michael Coats and wife, Jennifer, and bonus great grandchildren: Gauge, Garrett and Riley Coats. He was also survived by his many nieces and nephews, extended family and a host of friends, near and far, that hold a special place in his heart. Vinny also is survived by his precious ‘granddogs’: Boo, Buddy and Chance and ‘great granddogs’: Abby and Sadie Patches. Funeral mass for Vinny will be 11:00 am on Friday, September 25, 2020 at St. Martin of Tours Catholic Church in Forney. There will be a visitation beginning at 10:00am to 10:30am at the church. Vinny's family will also receive friends from 6pm to 8pm on September 24, 2020 at Max Slayton Funeral Chapel with a prayer service beginning at 7:30 pm including stories and memories of Vinny being shared after. On October 18, 2020, at 2:00pm, a memorial service will be held at the VFW Post 9180, 13300 FM 1641, Forney, TX, 75142 as well. All are welcome.

Vincent &#8220;Vinny&#8221; Jaroszewski passed away September 18, 2020. He was born October 18, 1936 in Chicago, Ill. to Vincent and Jane (Rutkowski) Jaroszewski, both of whom welcomed him into Heaven along with his siblings and their spouses:... View Obituary & Service Information

The family of Vincent "Vinny" Jaroszewski created this Life Tributes page to make it easy to share your memories.

Send flowers to the Jaroszewski family.