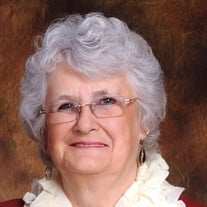 Virginia Janell Cook was born September 4, 1936 at Martins Mill, Texas to Robert Grady and Willie Pearlee Peel. She had three sisters and a brother: Jacqueline Petty, Lafern Mince, Cornelia Manley and Thurman Peel. Janell leaves behind her loving husband, Bill Cook of Terrell; sister, Cornelia Manley of Dallas; children; Marty Alan Roberts of Athens, Lindy Keith Roberts and his wife Anna of Quinlan, Brian Kelly Roberts of Terrell, and Lori Nell Roberts also of Terrell, Robert Peel and his wife, Cathy of Canton; grandchildren; Landon Roberts, Ami Roberts, and Casey Doner, Skylar Hoffman; great grandchildren; Ashlyn, Emma and Annmarie. Also surviving are stepson, Todd Cook and his wife Layla and their daughter Violet Rose, (Janell’s granddaughter, born on Janell’s birthday) of Wills Point and stepdaughter Sabrina Cook of Missouri City, as well as numerous nieces, nephews, cousins, and many special friends: Jodie Hobs, Angie Tucker, Kayla and Jamie Samples, just to name a few. Janell grew up on a farm in Canton where she attended and graduated Canton schools in 1956. That summer she married Edgar Roberts. Over the next several years their four children were born. Janell added a special son, nephew Robert Peel, to her family. They all lived in Janell’s home place just out of Canton, where Janell loved to sew, cook, and raise vegetable gardens. She loved to go fishing and especially loved deer hunting, which she did frequently. In 1973, they sold Janell’s farm and moved to Terrell. Janell worked at Hermoine’s in Terrell for several years, as an accomplished seamstress before beginning her career at Terrell Hospitals. She was an administrative manager in charge of handling insurance claims for the hospitals. She retired from Terrell Community Hospital in July 2000, in preparation to marry childhood friend and school mate, Bill Cook, of Houston. On November 25, 2000 she and Bill were married at Cana Baptist Church. She moved to Houston with Bill where she enjoyed retirement to the fullest, Country Club living on the golf course, shopping and dining at many restaurants, numerous trips to Minute Maid Park (where she loved to watch HER Houston Astros), vacationing in the Ozarks, frequent trips to Galveston for lunch and afternoons of sitting on Murdock’s decks watching sea gulls and dolphins as the waves rolled in. She especially enjoyed riding the ferry from Galveston to Port Bolivar and back. Janell and Bill were active members of Heritage Baptist Church in the Houston suburb of Missouri City where Bill served as a deacon. After moving to Terrell in 2016, they transferred their membership to First Baptist Church of Canton, where they enjoyed worshipping and visiting with many of Janell’s cousins and classmates. In the last few years, she enjoyed her morning trips to McDonald’s for breakfast and her favorite, FRAPE. Perhaps her greatest pleasure over the last several months were her multiple strolls. Bill pushed her in her wheelchair about a mile down neighborhood streets, where she gleefully waved and smiled at passing cars. She met many new friends during this daily stroll. Janell loved and was very close to Classmates from Canton High School, and especially the group of girls who gathered once a month for lunch every year since graduation. Janell was loved by all who knew her, and she made friends easily. Janell “added” a very special son, Police Officer Michael Anders of the Terrell Police Department. He “pulled over” Bill and Janell one day as Bill was pushing her down the street in her wheelchair. Bill told Janell, “I guess we are going to get a ticket for riding in the street.” The sidewalks were too broken to ride there. Instead, Officer Anders ran over and hugged Janell and said, “I have to meet you because you always wave at me as I drive by.” Over the following months Officer Anders stopped many times at their home to hold Janell’s hand, tell her how beautiful she was, and often prayed for her. Just seeing him brought a big smile to Janell’s face. She loved him dearly and he loved he loved her, calling her mom and she called him son. A special thanks to Dr. Wesley Wilson, and the multitude of Doctors, nurses, and therapist who cared for Janell, and especially Alinea Family Hospice who gave such professional and loving care to Janell. They are OUTSTANDING. SHE WILL FOREVER BE IN THE HEARTS OF ALL WHO LOVED HER. Funeral service for Janell will be 11:00 a.m. Friday, March 12, 2021 at Max Slayton Funeral Chapel. Her family will receive friends an hour prior to service time.

The family of Virginia Janell Cook created this Life Tributes page to make it easy to share your memories.

Send flowers to the Cook family.