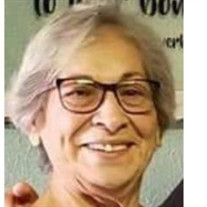 Virginia Martinez McClary, beloved mother, grandmother, sister, aunt and friend, passed away peacefully and into the presence of her Savior on January 31, 2022. She was born Aug. 4, 1944 in Dallas to Jesse and Socorro Martinez, both of whom preceded her in death along with other beloved family members. Virginia grew up in Dallas, specifically in Pike’s Park (also known as “Little Mexico") where she was surrounded by the love of her family and many friends. Early in life, Virginia was enrolled in St. Ann’s Catholic School until the 8th grade. She then attended Crozier Tech High School where she met the love of her life and best friend, Robert (Bobby Joe, or Bob). While dating, she and Bobby Joe had an amazing relationship based on mutual love and respect as well as a love for dancing! They both loved to dance and they often commanded the floor while others stopped and simply appreciated their immense talent. On April 7, 1962, she and Robert were married and together they raised their four children with the same devotion and love that they had for each other. Virginia was her childrens’ biggest supporter and was very involved in their activities including Boy Scouts where she was Den Mother and the first woman to be a leader in other positions besides Den Mother. She then continued serving with Camp Fire Boys and Girls where she impacted many lives during her tenure with these organization by her constant encouragement to each young man and woman to be the best leader they could be. She was a woman of many interests and abilities. She worked for Garland ISD, and upon retiring after 19 years of loyal service, she took care of her precious grand kids. Virginia then found a job at CC Young, a workplace that she absolutely loved, and she worked there, enthusiastically, until she became ill. Virginia was also a member of several civic clubs including Garland Women’s Club, Garland Republican Women’s Club, Garland Association of Hispanic Affairs, Garland Education Association, and Lifetime member of Dallas Mexican-American Historical League. While helping and volunteering with each organization, Virginia was a valued member where her enthusiasm was always welcomed. Her ability to see the best in any situation was a hallmark of her personality and her wisdom and the life lessons she willingly shared with others continues, and will continue, to positively impact and influence not only her own family but also many generations’ lives that she touched. Virginia always had a non-judgmental ear to listen, a smile when needed, a stern look when provoked, but always available to help with anything anyone would ask. She leaves her legacy of unconditional love to her husband, Robert Joe McClary; sons: Ralph Obie McClary, Robert Joseph McClary and Pam Binkley, and Richard Lark McClary and wife, Sherri Clark McClary; daughter, Corina McClary Wild and husband, Anthony Ulrich Wild; grandchildren: Allison McClary, Robert U. Wild, and Toni I. Wild; great grandson, Antwone Latrell Cox as well as brothers, sisters and numerous beloved nephews, nieces, cousins, aunts, other extended family and a host of friends. Virginia will be terribly missed, but will live on forever in our hearts. We will never stop thinking about her. She lives on in all of us. A celebration of her life will be at 11:00 a.m., Saturday, March 12th at Max Slayton Funeral Chapel with family receiving friends from 10:00 a.m. to service time. The celebration will continue the rest of the day at the Ben Gill Park Pavilion in Terrell, Tx. For those wishing, memorials in her honor may be made to: Dallas Mexican-American Historical League at www.DMAHL.org

Virginia Martinez McClary, beloved mother, grandmother, sister, aunt and friend, passed away peacefully and into the presence of her Savior on January 31, 2022. She was born Aug. 4, 1944 in Dallas to Jesse and Socorro Martinez, both of whom... View Obituary & Service Information

The family of Virginia McClary created this Life Tributes page to make it easy to share your memories.

Send flowers to the McClary family.