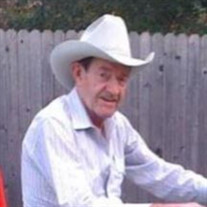 W.T. Wilson of Terrell passed away peacefully at his home with family by his side on May 23rd, 2022. W.T. was born February 23, 1938 in the Whitehead community near Poetry in Hunt County to Marie Conway and Leamon Wilson. He grew up on their farm before the family moved to Terrell. W.T. attended Terrell public schools and East Texas State University where he received his Texas Commission on Law Enforcement Certification. W.T. married Faye Riley on October 1, 1955 in Dallas. They made their home in Terrell and to this union 5 children were born. W.T. was self employed for most of his life, learning to set tile and then moving on to building homes. His company J&W Investments built many, many homes and apartments in and around Terrell. He proudly served the people of Kaufman County as a Deputy Sherriff in the early 70’s before becoming the owner of one of the largest businesses in Terrell at the time, The Terrell Livestock Commission. He was always a cattleman at heart. While he owned the sale barn, he was heavily involved in the cattle industry professionally and personally. For several years he purchased the Kaufman County Grand Champion Steer. After selling the Livestock Commission he stayed in the cattle business for many years and also opened a convenience store in Kaufman. He eventually went back to the tile business, setting the interiors of numerous long term care facilities from Texas to Florida. In later years he still built homes and owned and operated All Star Maintenance until his semi-retirement. During his retirement he remodeled and sold homes in the area as well as owning several rental properties. Known as Pop to multiple generations he shaped and influenced everyone he spent time with. His advice was invaluable. His people reading skills were unmatched. Whether it was life, business or general- he usually had the answer. He guided his family, extended family and friends all of whom benefitted from his counsel. He was a member of First Missionary Baptist Church, which he and many other members helped build. Prior to that he was a member of East End Baptist Church. Even while he was extremely busy providing for his family, W.T. also spent a great deal of time involved with his children’s activities. From church to father/daughter dances to FFA and 4-H, he was there as much as possible. W.T. was preceded in death by Faye Wilson, his parents Leamon and Marie Wilson, his brothers Lee Roy and O’Neal Wilson, son in law Greg Cobern and his greatest loss, his 2 sons W.T. Wilson Jr. “Buddy” and James Craig Wilson. He leaves to cherish his memory his long-time companion Pat Sullivan, children: Gail Langley, Harold Langley, Karen Wilson, Donna Smith, Steve Smith and Julie Young. His grandchildren: Chris and Crystal Langley, Jamie Wilson and Josh Duncan, Justin Sanders and Rosa Saldivar and Christina Cobern. Great grandchildren: Joseph and Deja Langley, Kason Duncan, Arlo Sanders, Andrew and Dylan Barnes, Rayelin Smith and Star Diaz. 2 great- great grandchildren: Ace and Mila Langley. His sisters, Jean Crow and Peggy Freeman as well as a host of beloved nieces, nephews and other relatives. We will see you again Pop and until that time, we carry your words and deeds in our hearts. Funeral service will be at 11:00am, Wednesday, June 1, 2022 at Max Slayton Funeral Chapel with interment to follow at Campground Cemetery. His family will receive friends 5:00pm to 7:00pm, Tuesday, May 31, 2022 at the funeral home.

W.T. Wilson of Terrell passed away peacefully at his home with family by his side on May 23rd, 2022. W.T. was born February 23, 1938 in the Whitehead community near Poetry in Hunt County to Marie Conway and Leamon Wilson. He grew up on their... View Obituary & Service Information

The family of W.T. Wilson created this Life Tributes page to make it easy to share your memories.

W.T. Wilson of Terrell passed away peacefully at his home with...