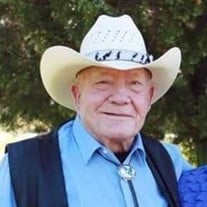 Wayne Thomas McNutt, 80, passed away on January 20, 2020 with his loving wife by his side. Wayne was born July 23, 1939 in Lexington, Oklahoma to Spurgeon and Ruby (Crosslin) McNutt, both of whom were there to welcome Wayne into Heaven along with his brothers, Doney Joe and Aubrey Earl and his sister, Barbara Faye Smith. Wayne grew up in Shawnee Oklahoma and after graduating high school, he enlisted into the United States Navy and served at the start of the Vietnam War. From an early age he enjoyed working with his hands and with his significant talent and design skills, he would become a master carpenter. He was able to open and own his own business, Wayne McNutt Construction Co. in Dallas, where he was featured in Better Homes and Garden displaying his kitchen design. Wayne had a love for the outdoors with a great appreciation for John Deere Tractors, his cows, horses, mules, and donkeys. In his spare time with family and friends, he enjoyed playing dominos and collecting guns. Wayne was an active former member of Gore Church of Christ and current member of Colquitt Road Church of Christ where his love in serving the Lord was an easily seen personality trait by all who met him. Wayne leaves to cherish his memory his beloved wife, Birdie McNutt; his children: Glenn Allen McNutt and wife Sheri, David Wayne McNutt, and Sandra Inez Cress and husband, Nathan; grandchildren: Laura Davis and husband Charles, Nikki Bheeler and husband Jeremy, Nate Cress and wife Jennie, Nick Cress and wife Tabbitha, Autumn Johnson and husband Monty; great grandchildren: Reylin, Ethan, Audrea, Gracie, Josiah, Addi, Jaycee, Londynn, Ali, Lana, Harley, and Brighton; sisters: JoAnn Barlow, Tina Parker, and Sharon Spicer as well as numerous nieces, nephews, and other relatives. Funeral service will be 4:00pm, Friday, January 24, 2020 at Rockwall and Brin Church of Christ in Terrell. His family will be receiving friends beginning at 3:00pm to service time. A private interment will be held at Dill Family Cemetery in Boswell, Oklahoma.

Wayne Thomas McNutt, 80, passed away on January 20, 2020 with his loving wife by his side. Wayne was born July 23, 1939 in Lexington, Oklahoma to Spurgeon and Ruby (Crosslin) McNutt, both of whom were there to welcome Wayne into Heaven along... View Obituary & Service Information

The family of Wayne T. McNutt created this Life Tributes page to make it easy to share your memories.

Send flowers to the McNutt family.