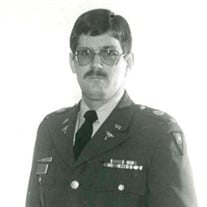 It is with deep sorrow that we announce the passing of our beloved Veteran, Wayne Edward Vinton, 73, of Forney, Texas. After dedicating his life to serving our country and communities, on May 12, 2022 Wayne went to his final resting place in Heaven. Wayne was born in Huntington, West Virginia on May 28, 1948 to parents, Vivian Lenore Osborne and Wayne Paxton Vinton. Also, preceded was a brother John Vinton. After graduating from Huntington East High School with the class of 1966, he decided to follow in his fathers footsteps and join the military. Wayne chose to begin his military career in the Marine Corps . He wanted to challenge himself and be a part of the toughest branch in the military. He enlisted in September 1966 and began his boot camp training at Paris Island, South Carolina. If you knew Wayne, you would know that he never backed down from a challenge. The Marine Corps Core Values are Honor, Courage and Commitment. These are the values that Wayne defined himself by. In the Marines, he was trained to improvise, adapt, and overcome all obstacles in all situations. These values became the building blocks that aided him in life when making the right decisions at the right time, both on the battlefield and in his Anesthesia profession. Wayne was an exceptional Marine. He was one of the most recognized deep-sea divers in his fleet and across the nation. He played a vital role in the success of eight military missions overseas, often being loaned out to support the Navy on vital diving missions. He started off as a tractor mechanic helper. Then was recognized for his exceptional diving abilities. He became an underwater photographer. He had a heart to serve our Nation and protect our country. His dedication and love of his country led him to the frontlines of the battlefields in Vietnam where he was a scout. In March 1970, Wayne faced his greatest challenge in his military career where he was awarded three Purple Hearts. Wayne’s strength and determination to survive combat showed his true character. Quitting was never an option. He received many awards and recognition for his heroic actions in Vietnam including: National Defense Service Medal; Vietnam Service Medal w/1*; Vietnam Campaign Medal w/device: Purple Heart Medal; Combat & Action Ribbon: Presidential Unit Citation. Marines are taught to never accept defeat and to always hold themselves to a higher standard. During his extensive hospital recovery, Wayne found his calling in life. He wanted to help people who were in pain in the hospital. After living through almost dying, he decided to take his life experiences and help others through it. This was when he decided to pursue a career as a registered nurse and then an Anesthesiologist. After serving 8 years in the Marine Corps, he was commissioned into the Army as an officer in September 1980. In the Army he worked all around the country as Certified Registered Nurse Anesthetist. He acquired the nickname “Dr. Sandman” from the children at Shriners Burn Institute. His colleagues would also refer to him as “The Cookie Tester”, especially around Christmas time. This was his favorite time of the year. He worked in over 50 military and civilian hospitals throughout the United States. After 35 years of service, Wayne retired from the military in 2001 as a decorated Major in the Army. Wayne dedicated his life to helping people in pain and training others in his profession. He was passionate about many things including riding his Harley Davidson, shooting guns, traveling the world to scuba dive, history, underwater photography, geology and rocks, watching movies with his wife, reading medical journals, serving as a Master Mason for 49 years, listening to music, cooking and celebrating Christmas with his family and grand-children. Wayne's legacy will not be forgotten, he is survived by his wife, Joy Chandler military counselor, of Forney, Texas, step-children, Andrew and Candace Driver of Ferris, Texas, Rani and Raul Prieto of Hutto, Texas, Kate Chandler of Dallas, Texas and Cameron and Courtney Chandler of Bedford, Texas. He is also survived by grandchildren Madeline and Mackenzie Allen of Ferris, Texas. Funeral Services are scheduled for Graveside services are open to the public and scheduled for June 6, 2022 11:00AM DFW National Cemetery 2000 Mountain Creek Pkwy Dallas, TX. 75211 Lane 1. In lieu of flowers, please donate to : Shriners Children’s Burn Institute 815 Market St., Galveston, TX. 77550 Memberships: American Association of Nurse Anesthetists Texas Association of Nurse Anesthetists Elyria Masonic Lodge # 787 Elyria, Ohio Ancient Accepted Scottish Rite, Cleveland, Ohio Al Koran Shrine, Cleveland, Ohio Reserve Officers Association of the United States Association of Military Surgeons of the United States National Rifle Association

It is with deep sorrow that we announce the passing of our beloved Veteran, Wayne Edward Vinton, 73, of Forney, Texas. After dedicating his life to serving our country and communities, on May 12, 2022 Wayne went to his final resting place in... View Obituary & Service Information

The family of Wayne Edward Vinton created this Life Tributes page to make it easy to share your memories.

It is with deep sorrow that we announce the passing of our beloved...

Send flowers to the Vinton family.