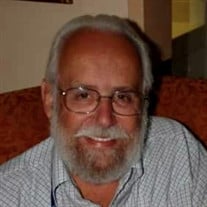 William Carl Jump, Jr., of Terrell, passed away on December 12, 2020 peacefully at his home surrounded by his family. Bill was born Aug 5, 1943 in Covington, KY to William, Sr. and Helen Jump, both of whom met him in Heaven along with his children: Jenny Jump and Carl Jump; sister, Marie England and brother, Edward Jump. Bill worked for 27 years with Microsoft as a Senior Field IT Manager at the home office in Redmond, WA and then, later, at Las Colinas, TX. In March of 1980, he married the love of his life, Susan, in Canoga Park, CA where their lives together were filled with many adventures along with love for each other and their children. He was a devoted husband, father and grandfather and Bill’s love for his family was very well known. He was also a loyal friend and mentor to many, and his advice and counsel was sought after by the many folks that knew him and colleagues that worked with him. He enjoyed traveling and exploring to different destination where he loved to see and learn new things about all 50 states and making treasured memories at each location. Bill also enjoyed construction and re-modeling projects that he and Susan shared an interest in as they enabled each place to reflect their signature design ideas. Bill spent his free time enjoying his hobbies including gardening, reading and watching science-fiction, and building model trains just to name a few of his interests. His favorite times were spent with family and friends, spending time and helping in any way that he could. A man with no limit on the amount of love for his family and those he cared for, Bill will be missed by all who knew him. Bill leaves to cherish his memory to his wife of over 40 years, Susan Jump of Terrell; daughters: Jennifer Bryant of Wasilla, Alaska and Mariah Johnson of Terrell; grandsons: Jonathan Bryant and Andrew Bryant, both of Freeland, WA; granddaughter, Kaitlyn Johnson of Terrell; great granddaughter, Raleigh Ross of Freeland, WA; sister, Carol Callen of Crittenden, KY as well as several other extended family and friends who loved him dearly. A celebration of his life has been planned 3:00 p.m. Wednesday, December 30, 2020 at the Colquitt Road Church of Christ in Terrell.

William Carl Jump, Jr., of Terrell, passed away on December 12, 2020 peacefully at his home surrounded by his family. Bill was born Aug 5, 1943 in Covington, KY to William, Sr. and Helen Jump, both of whom met him in Heaven along with his children:... View Obituary & Service Information

The family of William Carl Jump Jr. created this Life Tributes page to make it easy to share your memories.

Send flowers to the Jump family.