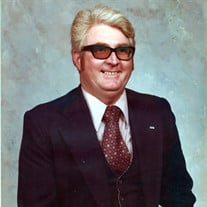 William Lee Elliott, of Terrell, passed away peacefully on March 7, 2018 in Dallas with his family at his side. Lee was born Feb. 6, 1942 in Terrell to Albert Alexander, Jr. and Pat (Crawford) Elliott, both of whom preceded him in death along with his two sisters, Judy Wallace and Sandie Webb. Lee grew up in Terrell and graduated Terrell High School. He met the love of his life, Betty Belew, at a football game and she knew she had met her match in Lee. While they courted, he let her know that she was the “one” for him and he would marry her by “hook or crook”! Of course, she was totally charmed by his devotion to her and on Feb. 3, 1966, they were married. Lee told many that she was the best birthday present he had ever received. Through the years, their marriage would be a testament to so many others of how love really can conquer all things. They kept the Lord at the forefront of their relationship at all times and as they served Him, they continued to grow closer to each other developing to be an “out loud” love that was celebrated by all who knew them. Lee was a wonderful, Christian man who would do anything for his friends, family and any one in need. He was a member of many churches with his most recent membership being at New Life Church. He was sweet, kind and loving and the only thing bigger than how tall Lee stood was his heart and many considered him a gentle giant. He was generous to a fault and there was not a time that he wasn’t ready to pitch in and help in any way that he could. He loved the outdoors and fishing was his favorite-he and Betty had many getaways where they would be able to enjoy each other’s company, God’ creation and catching dinner! As spectacular a husband as Lee was to Betty, he was an even greater father, grandfather, great grandfather and brother. His unconditional love will be a treasured heritage that his family will be proud to carry forward. Lee leaves to cherish his memory his wife of over 52 years, Betty Elliott of Terrell; daughter, Paula Johnson and husband Marvin, of Canton; son, Terry Lawson and wife Debra, of Terrell; seven grandchildren; 16 great grandchildren; 1 great-great grandchild; sisters: Sharon Hennig and husband Gerald, Deana Boyd and husband Bobby; brother, Harold Elliott and wife Linda; and his aunt who was more like a sister, Ruby Mobley as well as several nieces, nephews, extended family and a host of friends. Funeral service and celebration of Lee’s life will be 11:00 am, Monday, March 12, 2018, with the family receiving friends beginning at 10 :00 am to service time at Max Slayton Funeral Chapel. Inurnment will follow at a later date at Chisholm Cemetery. For those wishing, memorials may be made to the Chisholm Cemetery, 353 League Rd., Rockwall, TX, 75032.

William Lee Elliott, of Terrell, passed away peacefully on March 7, 2018 in Dallas with his family at his side. Lee was born Feb. 6, 1942 in Terrell to Albert Alexander, Jr. and Pat (Crawford) Elliott, both of whom preceded him in death along... View Obituary & Service Information

The family of William "Lee" Elliott created this Life Tributes page to make it easy to share your memories.

William Lee Elliott, of Terrell, passed away peacefully on March...

Send flowers to the Elliott family.