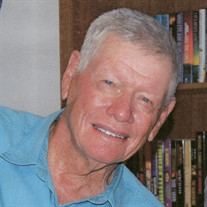 William E. “Bill” Pearson, longtime resident of Terrell, passed away peacefully on Aug. 9, 2019 at his home. He was born Feb. 19, 1924 in Wildersville, Tenn. to John and Birdie (Wicks) Pearson, both of whom preceded him in death along with his brother, J.W. Pearson, twin sister, Edna Elizabeth Johns and sister, Geraldine Hodges. Bill proudly served his country in the Air Force from 1942 to 1952 after which he was honorably discharged achieving the rank of First Lieutenant as Bombardier Navigator. During his enlistment, he met a beautiful young lady named Johnet Yarger. On March 10, 1945 in Kerrville, Tx, they married and together they built a loving home for themselves and their children. In 1964, Bill and Johnet moved to Terrell where his skillset as a landscaper and landscape architect enabled him to own and operate Pearson’s Landscape and Nursery. While Bill’s talent for growing anything was very evident to those who shopped at his nursery, he was best known for his ability to successfully cultivate, transplant and grow trees to help them stay healthy as they set their roots to grow strong for homes, businesses, school campuses and parks. Many areas in and around Terrell are still blessed with abundant shade trees and decorative trees that every resident and visitor still enjoy today. As big a part that landscaping played in Bill’s life, the best part was being a husband to Johnet and a father to his sons, Mike, Mark, Gary, Keith and Kyle. Bill’s steadfast work ethic was one he was proud to demonstrate every day so that his sons, in turn, became dedicated and committed in every endeavor that they became involved in during their lives. His wise advice and counsel was always welcome by his sons in every conversation as well as by the many friends Bill made during his life. His legacy is exactly like the beautiful trees he helped plant: strong in love for family and rooted in support of friends so as to be there for generations to come. Bill leaves to celebrate his memory his wife of over 73 years, Johnet Pearson of Terrell; sons: Mike Pearson and wife, Vicky, of Terrell, Mark Pearson and wife, Donna of Terrell, Gary Pearson and wife, Debi, of Terrell, Keith Pearson and wife, Pam, of Wills Point and Kyle and wife, Beverly, of Wills Point; numerous grandchildren, three bonus grandchildren, great grandchildren, great-great grandchildren, nieces, nephews, other extended family and a host of friends who loved him and will miss him dearly. Graveside service will be 10 am, Tuesday, August 13, 2019, at Highland Memorial Gardens in Terrell with military honors. Family will receive friends 5 pm to 7 pm Monday, August 12, at Max Slayton Funerals and Cremations. In lieu of flowers, the family requests memorials be made to St. Jude's Children's Research Hospital www.stjude.org or to the charity of your choice. Bill's family would like to extend their gratitude to his wonderful caregivers, Karen Soto and her helpers for their incredible kindness.

The family of William "Bill" Pearson created this Life Tributes page to make it easy to share your memories.

Send flowers to the Pearson family.