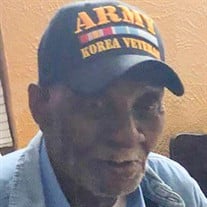 Willie James “Ray” Peterson, Sr. passed away April 1, 2020, at his home. He was born February 2, 1926 in Groesbeck, Tx. to Julius B. and Fannie Mae Smith Peterson, both of whom preceded him in death along with his wife of 67 years Geraldine Peterson who passed on January 31, 2019. Those also at the gates of Heaven ready to greet Mr. Peterson’s arrival are his son, Roscoe Peterson and daughter, Gracie Howard; brothers: Ben Lee, Melvin “Pete”, Alvin “Bo”, Robert “Flick”, Wardell “Jack”, Lugene “L.C.”, and G.W. “Billy”, as well as sisters: Willie D. Gilbert and Jessie Mae Johnson. Mr. Peterson enlisted in the US Army and was honorably discharged after serving during the Korean Conflict. He retired from Affiliated Foods after 30 years of dedicated service where his friendly smile and contagious sense of humor made doing business with him always memorable with coworkers and customers alike. Although mostly a quiet man, Mr. Peterson was a born story teller and had a great talent in remembering, and recounting, the many details that made the stories quite interesting and, more often than not, incredibly entertaining! He was a fixture in his neighborhood, riding his lawnmower around and passing the time with many leisurely visits with his neighbors. Mr. Peterson found joy in the simple things: sitting on the porch, being out in the country and outdoors, drinking coffee and he truly looked forward to the popcorn that was available when he had appointments in Dallas at the VA Hospital! These were among the many little pleasures he appreciated and never took for granted. His love for his family was well known and, having grown up in a large family, Mr. Peterson treasured the times that he was able to share with each of his family members at many gatherings and reunions. A man of hard work and integrity, Mr. Peterson’s example of selfless love will be proudly carried on by his family into future generations. Mr. Peterson leaves his memory to be cherished by his children: Willie Jr., Debra and her husband, Alvin, Edmund and Julius; 16 grandchildren: Roy, Jocelyn, Shawna, Dana, Roscoe Jr., DeLana, LaDonna, Niesha, Jeremiah, Carla, Amanda, Rachel, Zion, Zaraya, Angeni, Zameron; 21 great grandchildren; and 1 great-great grandchild; daughter-in-law, Helen; and sister, Bessie M. Haggerty as well as many other extended family and a host of friends who loved him and will miss him dearly. Willie's family will receive friends 4 p.m. to 8 p.m. on Thursday, April 9, 2020 at Max Slayton Funeral Chapel. There will be a private graveside at the Dallas/Ft. Worth National Cemetery.

The family of Willie "Ray" Peterson Sr. created this Life Tributes page to make it easy to share your memories.

Send flowers to the Peterson family.